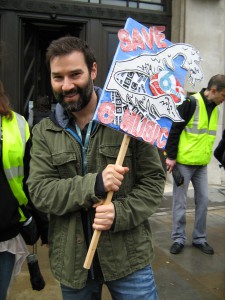 A second protest against the proposed closure of the Best Radio Station In The World™, BBC 6Music, will be held on Saturday at Broadcasting House in London’s West End.

The protest will start at 12noon and last two hours. FFS went to the last one, and a more well-attended and civilised event you couldn’t imagine. (Read our report.)

Organiser Georgina Rodgers said: “Come along to show your solidarity and support; bring a flask of tea and have a sing-along all in the name of saving BBC 6 Music. Invite everyone you know who might not have been invited through the Facebook group and let’s make this a protest to remember!”

If the station’s wonderful and unique output wasn’t reason enough to save it, listening figures at 6music have soared since it’s possible closure was announced, it has been revealed. The digital radio station recently broke the 1m listener mark. Online listeners have increased by 50% in the past year.

Come along, bring a placard, and join us in telling the BBC Trust not to be a bunch of squares. And if you see us wandering around in our FFS t-shirts, be sure to say hello.

← Johnny Flynn postpones tour dates due to illness
Blog: Will the next Joni Mitchell please stand up? →