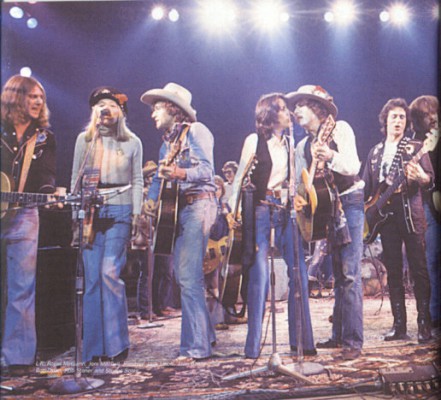 Mitchell, Baez and Dylan take to the stage during his Rolling Thunder Revue

Of course it’s possible to go round in endless circles discussing Joni Mitchell’s recent comments about Bob Dylan’s authenticity, and whether or not they were legitimate, fair or frankly rather hypocritical coming from someone whose name is not exactly her own either.

“We are like night and day, he and I”, Mitchell told the LA Times, forcing fans to think about their attitudes to these two folk deities who had suddenly been pitched against one another.

For many, including For Folk’s Sake, this assessment of Mitchell v. Dylan highlighted a chronic lack of appreciation for Mitchell’s part in folk history, compared to the constant championing of Dylan’s influence. I have no desire to Dylan-bash, but thinking further about Mitchell’s legacy, I have an uncomfortable feeling that this under-valuing is indicative of wider trends.

Dylan’s name is wheeled out at every conceivable opportunity by journalists looking for a shortcut to describe the latest promising male singer-songwriter. If you have a penis, scruffy hair and guitar you will, invariably, at some point be described as ‘the next Bob Dylan’. It’s a law of nature.

Now substitute it for ‘the next Joni Mitchell’. How frequently do you read that? Possibly about an artist like Laura Marling, whose vocal power and lyrical maturity deservedly wins comparisons with the great woman, but I would argue, nowhere near as frequently as the male equivalent. Maybe because there are fewer women making real names for themselves in folk music and able to be held up as ‘the next Joni Mitchell’, or at the very least, fewer journalists wishing to employ her name because, just maybe, she’s not considered as important as Dylan, despite the huge contribution she made.

This isn’t necessarily a bad thing of course: perhaps female musicians are actually more original than their male counterparts, and therefore deserve assessments on their own merit, rather than merely being described as ‘the next’ anything. I can’t imagine anyone actually liking the tag and pressure of being ‘the next’ Mitchell/Dylan in the first place. But what this sort of reference does do is automatically raise the profile of the original artist amongst subsequent generations, and all too frequently it is Dylan, not Mitchell, who is held up an as ideal to which folk musicians must aspire forever more.

Yet the preference for emphasising Dylan’s importance over that of women doesn’t just exist in the musical realm, but spreads to political activism too. Dylan denied ever being a spokesman for his generation and abandoned protest songs with his move to a rockier sound, while many of his most resonant lyrics have had their meaning projected onto them through association with subsequent political events. Yet he remains the poster boy for the protest singer. Joan Baez on the other hand, who has, and continues to, campaign ardently throughout her career for peace, human rights and environmental causes, is largely overlooked. If anything, she’s merely the woman in the photograph sat next to Dylan at the March on Washington. That’s all.

Dylan, Mitchell and Baez were making music at a time when sexual practices and attitudes were changing forever and in that same LA Times article Mitchell discusses the prejudice she faced as a female musician in the past tense. Yet maybe things haven’t changed all that much: it seems to me that women continue to be overlooked. Maybe we just need more artists – male or female – to publically recognise the influence that Ms. Mitchell has had on their work, and generally we all need to be more willing to champion women’s contributions to music and politics as being just as, if not much more, important than those made by men. The fact is, there are incredible female artists breaking new ground; watching Laura Marling and Alessi’s Ark on their recent tour together made me realise how bored I am of boys with guitars, and yet a night of two, strong female folk musicians holding their own still felt, infuriatingly, like too rare an occurrence.

4 comments for “Blog: Will the next Joni Mitchell please stand up?”