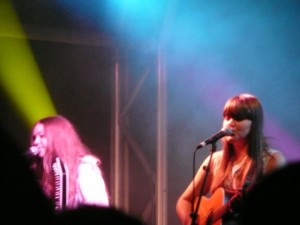 The ladies of First Aid Kit

The Green Man promised magic and he didn’t disappoint.

Once again the organisers pulled off the spectacular trick of attracting the friendliest festival crowd to the most laid-back festival there is, while enticing some of the weirdest and most wonderful bands out there to perform.

Manchester krautrockers Plank get the party started in fine style over in the Far Out tent, while heirs to Hefner’s geek-pop throne, Wave Pictures, are the first of many great acts to grace the main stage.
Travel disruption sees Mountain Man miss their main-stage slot; they are replaced by the idiosyncratic but weirdly compelling songs of Sweet Baboo (check his track ‘Who Would Have Thought’ for evidence) and the wonderful Caitlin Rose, who looks a little nervous on the big stage but plays her heart out. When Mountain Man do eventually take to the intimate Green Man Pub stage, their intricate harmonies impress but are perhaps not quite as mind-blowing as hoped for. 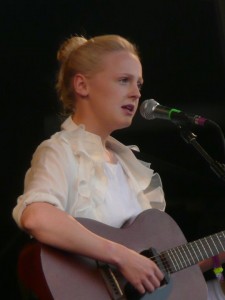 That particular honour goes first to Steve Mason, who delivers a confident set that includes classic Beta Band and King Biscuit Time tracks (‘Dry the Rain’ and ‘No Style’ respectively). The fans are thrilled and the newcomers are impressed. Fuck Buttons follow and they drop an immense set of looping and building multi-textured behemoths as only they can.

Where to go from there? An Horse are playing their hearts out at the GM Pub, while Doves are plodding and pounding through their back catalogue in a vaguely stirring way. Time for bed.

Come Saturday, the sun has come out (as have a sea of blankets and festival chairs) and normality is restored. Welsh warhorses El Goodo kick things off on the main stage, wearing their Super Furry influences proudly on their ragtag sleeves, and Race Horses also represent the home nation proudly with their Gorky-esque indie-pop.

Over in the Far Out, the absurdly young Egyptian Hip Hop kids impress with their gothy rock, Voice of the Seven Thunders feel slightly anonymous in comparison, and Summer Camp arrive like a summer breeze with their pre-meditated, almost sycophantic ode to 80s pop, but are fantastic with it. 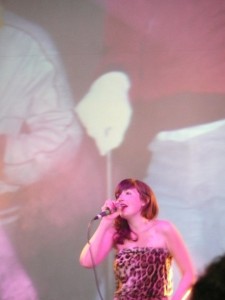 Avi Buffalo show enough potential to suggest good things may yet come from them, while These New Puritans are just a bit miserable and, well, puritanical to really go down well in these idyllic environs. Wild Beasts, on the other hand, hoot their way through a polished, brilliant set that has the tent howling for more. Over on the main stage, things are getting weird with Wayne Coyne’s lazer-jazz-hands – his band the Flaming Lips are predictably epic as ever. But the real freakiness is going on elsewhere, with Neon Indian‘s set-of-the-weekend for the 100 or so people there to witness it. “Like a discofied version of Chk Chk Chk….” they are one of the discoveries of the weekend, month, year even. But the night is not over yet. There’s still time to squeeze in a bit of Metronomy before bed. These guys really have developed into the finished article, the perfect party band – absolutely immense! Honourable mentions too for the lovely First Aid Kit, who are just great, and the quietly impressive Scottish folkie Rachel Sermanni.

Sunday starts in sardonic style, with the deadpan Steve Adams showing off his new band, Singing Adams (“A big hand for Melinda on the drums. She’s a horrible person but a great drummer”). The lyrics are great and the sing-along moments are rather lovely too. And if the band thing doesn’t work out, Steve has a sure fire future in stand-up comedy. Things go from sunny to surreal with the arrival of Darwin Deez, who pull a big crowd, possibly due to their camp-as-Christmas dance routines rather than the music. Nowt wrong with that, mind. By contrast, Alasdair Roberts sits at the other end of the music spectrum, with his serious, traditional folk songs culled from as far afield as New Zealand and 9th century Persia. The final tune, an epic for all the people in the crowd on anti-depressents, is about as eccentric as it gets though. 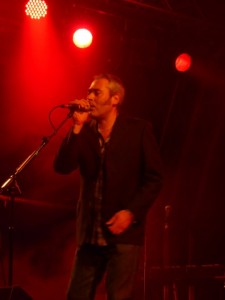 Field Music, Laura Marling and folk boy-band Mumford & Sons all come and go with impressive, if perfunctory sets, leaving the crowd in the capable hands of the swoonsome but slightly world-weary Tindersticks. The bubble and squeak of Joanna Newsom soothes a massive main-stage crowd as night falls and the rain returns with a vengeance. But there’s one more surprise in store for people down the GM pub – Silver Columns are the most baffling, nuts act of the whole weekend. Comprising folkie stalwarts Adem and Pictish Trail, the Silver Columns are early 90s rave, Erasure and c.2007 handbag house all rolled into one. You get the feeling the whole project is a bit of a joke, but there’s no denying it’s a pretty good one.

A weird way to end the festival perhaps but this is Green Man where, as they say, you should always expect the unexpected…