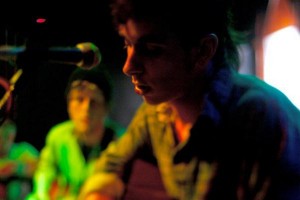 Southwestern group Moths and Leeches is the vehicle for singer-songwriter Matthew Caron. They have a simple philosophy. “We will play for you,” they say. So the panel took them up on the offer to see what they’re all about.

Alice Sage: Worthy of modern nu-metal/country crossovers like Limp Bizkit’s atrocious cover of Behind Blue Eyes, this is misery for the sake of misery. Almost utterly lacking in either originality or charisma, this is quite dire. Hand of Hades is musically a little more interesting – with metal-scratchy guitar and quivering vocals. However, as you can tell from the names (Moths and Leeches? For pity’s sake – his name is Matthew!) this is pitifully self-involved dirge. It’s a shame, because his voice is fine and his accompanying instruments are accomplished, if predictable. With a little perspective and a lot less back-bedroom, Doors-worshipping angst, he might be okay.

Jono Ganz: Moths and Leeches can be hard to listen to. Good Balance starts off well, a yearning, country-tinged ramble. Momentum builds, the loose chords and overpowering bassline relentlessly gathering tension as Matthew Caron’s voice pleads with the listener, but there is no release from this pressure, no chorus or bridge to break from the increasingly unbearable repetition. The other songs on the band’s MySpace page are similar: promising at the beginning but, on the whole, rather dissatisfying. Soft Truths gets into a sort of blues-rock groove that carries the song along, but I can’t help but spend the whole song waiting for a change. It’s a shame, as each song sounds like it has potential from the start, but Caron prevents his songs from progressing past this potential and into something truly great.

Ian Parker: Listening to Moths & Leeches is a frustrating exercise. There is promise but no delivery. Matthew Caron’s songs come across as earnest, but largely dull. Melody is not a concern here, only rhythm, and even then it is scarce and not enough to hold the attention. Songs just drift along rather aimlessly, searching for a hook that never grabs them. It’s difficult to find anything to hang your hat on here to make him stand out from the crowd.

Check out Moths and Leeches for yourselves here.