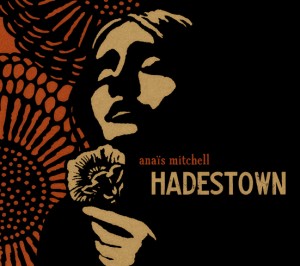 Anais Mitchell’s Hadestown absolutely blew us away when it was released this year. It’s a folk opera based on the story of Eurydice and Orpheus feauring performances by Justin Vernon of Bon Iver as Orpheus, Greg Brown as Hades, Ani DiFranco as Persephone and the Haden Triplets. What’s more I feel pretty confident in saying that everyone we’ve recommended it to has loved it too. It’s touching and rousing. It’ll make you dance, swoon and cry. And it’s simply awash with beautiful melodies and gorgeous orchestral arrangements. We’ve said it before and we’ll say it again: buy this album.

After that, you won’t be surprised to hear that we nominated Hadestown for our best album poll – the Schmercury Award. And starting today we’ll be bringing you exclusive interviews with the Nominees ahead of the announcement of the winning album on 14th September. You can vote at the bottom of the page for your favourite. But for now, over to Anais…

FFS: Congratulations, you’ve been nominated for a Schmercury. How do you feel?
Anais Mitchell: Oh really Schmarvelous thank you very much!

Aside from your own, what’s your favourite album on the Schmercuries list?
Oh God, I’m terribly embarrassed, but I have to tell you that I haven’t heard ANY of those other albums. I was going to make believe I had, but you’d have seen right through me. The thing is I am terribly out of touch, all I listen to right now is old folk ballads, like early Paul Brady and Nic Jones and Martin Carthy and Paddy Tunney.

What album have we missed off the list?
Okay, racking my brain for one album released this year that I know of. Hmmm. Oh yes! There is an AMAZING record out by a friend of mine named Amy Correia. It’s called “You Go Your Way”, it’s independently released and it will blow your mind.

What are your thoughts about your album?
Hadestown has been a long time in the oven. The opera started out as a live stage show in Vermont where I’m from. It was a very friends and neighbors type thing at first: me, Michael Chorney who wrote the orchestral arrangements, my friend Ben Matchstick who directed the show and wrote the visuals/staging, and all our friends who sang the parts.

We put up two live versions of the show before making the record with our producer Todd Sickafoose and all the heroic guest singers. I think Todd did a really beautiful job of helping take this thing that had already been sweated over a lot and getting it on record in a way that celebrated its weirdness but still made it accessible for listeners.

I’ve been a bit obsessive at times about the songs, but I don’t feel like I obsessed over the album in the way that sometimes happens where you destroy things with perfectionism (I do that). It was a great process of trusting the arranger, trusting the producer, trusting the singers, and letting it just run like a river its inevitable course. I have never really felt that Hadestown, or the Hadestown album, was “mine”, so many people had their hands on it.

Did you know it was special when you were making it?
There were a lot of cosmic moments when the stars kind of aligned to make things possible, which made me feel that we were on the right path. For example, when we were Orpheus-hunting, and out of the blue, I met Justin Vernon. or, Ani DiFranco casually suggesting I ask her bassist Todd Sickafoose to produce the album. Or, the snowstorm that held off just long enough for me to get from Justin’s house in Eau Claire, to Greg’s house in Iowa City, and back to the airport in Minneapolis, to get the vocal files to Todd’s studio in Brooklyn, and so forth!

Were you happy with it when it was released?
I was so happy when it was finally released. I’d been living with it in my head for so long, talking about with any poor innocent bystander who would listen, so it felt good to be like, no no look, it’s real, it exists!

Are you more or less so now?
Oh my goodness I don’t know, I don’t listen to any of my records, but, if H-town comes on in my local cafe or something, I still get excited, instead of looking for a table to hide under, which is how I sometimes feel about my recordings.

What do you think about the reaction to it?
I had no idea this weird stuff would strike a nerve, I’m so grateful. It’s like validation for being a geek.

What’s your favourite song on the album?
Ah, that’s like asking which of my children I love best, I could never say!

What’s your favourite album ever?
Well a few that I go back to again and again are Gillian Welch’s “Time (The Revelator)” and Peter Gabriel’s “So” and Paul Brady’s “Welcome Here Kind Stranger”.

Do you have plans for your next album?
Yah, it’s funny as I’m writing this I’m flying home from a recording project in Vancouver, BC. It’s a record of old British folk ballads I’m making with my friend Jefferson Hamer.

We’ve spent a lot of time this year arranging them from multiple versions, trying to make the stories clear and fun for us to sing. Jefferson’s a really killer guitar player and we’re singing a lot of harmonies.

We were up all night with our friend/producer John Raham, finishing as much as we could, then we had one drink at the one Italian restaurant where we could get a drink in the middle of the night, then I had to get a cab to the airport for this flight. We have more work to do but I guess this thing is probably gonna be the next album!

Read more about the 12 nominated albums here and vote for your favourite below. (You can vote up to once a day, if you’re keen.)