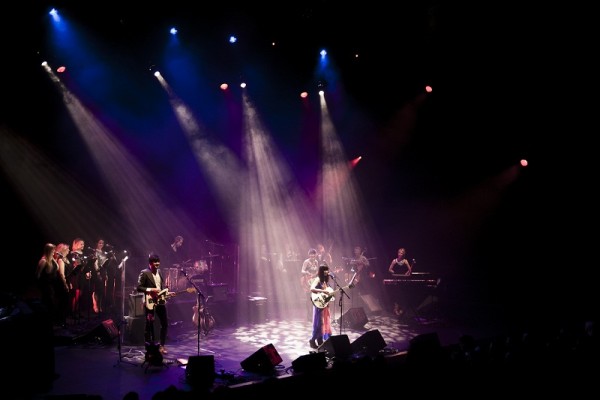 It is a truth universally acknowledged that a great band in possession of incredible songs must be in want of a string section.  Emmy the Great is just such an act, and FFS is delighted to report that she + strings = rapture.

Joking that she was delighted to be the very late headliner to follow Sinead O’Connor (who had played QEH the night before) Emma Lee Moss was strong, assured and irreverently charming throughout, whether accepting shouted advice from her sister in the audience, describing the scent of her nervousness (she was musty for most of the day, by all accounts) or bantering her way through the sipping of multiple beverages.

Playing mostly songs from last year’s Virtue, along with a smattering of older favourites (including a breakneck rendition of ‘Canopies and Grapes’ in the encore), Emmy appeared with an unusually inflated stage presence to celebrate the Women of the World festival.

Along with her regular band mates, she-who-is-great was enhanced in her greatness by the one-off addition of ‘Orchestrate,’ an eight-woman combination of string section and operatic chorus. Set in the context of international women’s day, the fragile illusion of control described in ‘We Almost Had a Baby’, brought to a magnificent crescendo by no fewer than ten highly accomplished, rambunctiously confident female performers, seemed a perfect realisation of female experience in the 21st century: sometimes uncertain and brittle, but rooted increasingly in a ferocious strength.

The evening was a gorgeous one, with the swelling effects of ‘Orchestrate’ lending a clear sense of occasion to a one-off performance, with arrangements which, we were assured, will ‘never be heard again’.  Indeed, in lamenting the absence of recording equipment for this most temporary of gigs, Moss sanctioned the (pretty illegal) videoing of the remainder of the performance.  YouTube’s going to be full of pretty very soon, we should think.

The very gentle disparity between the formality of the setting and the relaxed, impious approach of Moss to the performance left us longing for the shuffling feet and sticky floors of a smaller, less rigidly arranged venue, but there’s a lot to be said for taking a seat on a Sunday night and being figuratively, rather than literally, knocked off your feet.  Brace yourselves:

Thank  you to Toby Andrew for his lovely photography. You can visit Toby’s Flickr here.