Performing and recording as Pagan Wanderer Lu, Andy Regan combines his electro-indie-pop music with clever, wry and sometimes political lyrics. Andy also writes at paganwandererlu.wordpress.com and has done a turn as a guest blogger for the Independent. Here he delves into the word of songwriting, beginning with a rock-solid premise no-one could deny…

It is an irrefutable fact that ‘Mr Writer’ by the Stereophonics is the worst song ever written. 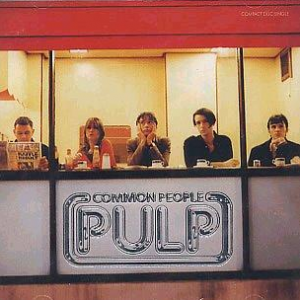 Irrefutably the best song ever written

Likewise no one can sensibly disagree that ‘Common People’ by Pulp is the best. It is truly remarkable that, following 6,000 years of human history, this peak and trough in creative endeavour came to pass within just three short years of the same decade.

David Bowie once said that writing about music was like dancing about architecture – (or possibly someone else said it – I believe what I want to believe).

Richard Dawkins once wrote that the key to understanding evolution from a gene’s point of view was to think of DNA, not as a blueprint for a living thing, but as a recipe. A set of instructions which create the conditions under which a cake will appear, rather than a particular segment of cake corresponding to a particular line in the recipe.

Heston Blumenthal regularly asserts that all the high concept and wacky techno cookery in the world are no use whatsoever if the plate of food that you get at the end doesn’t taste great.

Stevie Wonder once sang ‘just because a record has a groove don’t make it in the groove’.

Draw a straight line through each of these viewpoints, and mark the point on the map where those lines intersect. There you will find an ancient tome, bound in the skin of all four members of the Beatles (it exists outside time) marked ‘How to write a good song’. Whoever possesses it can never fail to consistently combine words and music in a way which all human beings would recognise as unambiguously perfect. Once it is found it will render all music criticism, end of year lists, and the concept of ‘reviewing’ music obsolete.

Until you return from your quest, we have this column. I’ll do my best.

My problem is I can’t quite shake this feeling that music is important. That it matters what goes through someone’s mind when they sit down with their guitar, piano, harp, casio keyboard, or omnichord and try to write a song. And that, even if it’s not important, it’s at least interesting.

Some people write songs with all the detailed premeditation and introspection with which they go to the toilet – I envy them. Others write painstakingly, agonising over every syllable and semi-quaver, over the positioning of a microphone or the tone of a guitar – I envy them too. The funny thing is that both approaches produce great songs, but not consistently. So is songwriting a recipe rather than a formula?

"Firstly, you must be skint and on the dole..."

Bill Drummond and Jimmy Cauty, better known as the KLF, produced a book called ‘The Manual: or how to have a number one single’. Aside from guaranteeing to refund the cost of purchase to anyone who followed its instructions to the letter and failed to have a hit, it included the assertion that if two individuals, using the same pieces of equipment, produced two pieces of music, both consisting of nothing but a kick drum playing the fours at 120bpm for eight minutes it would still be possible for one of those records to be ‘better’ than the other.

The book asserts that something of the personality of the creator would still find its way into the groove, and be detectable by the listener. I made such a recording once, I never bothered listening to it all – I suppose it would be dull having your own personality hammered into your head for eight minutes.

But is that what makes a good song? Personality?

Music comes from two places buried deep within our evolutionary past. The first and most important is ‘song’ in the sense that a bird ‘sings’ – a means of communication which predates language. I’ll come back to that in another column, partly because it deserves 1,000 words to itself, and partly because the second, and more titillating is to do with sex.

I am perfectly convinced that the desire to make music is a sublimed manifestation of the urge to attract mating partners.

I’m not saying that every individual who writes a song secretly thinks ‘this will get me laid’ — though some clearly do. But these basic desires are as fundamental to how we think as the shape of our legs is to how to we walk.

I’m often surprised at how people feel thinking about music in this way cheapens it in some way. What I’m saying is that whilst the root of music is in this basic need to draw attention to oneself and be impressive, it’s evolved along with us, and become a pastime in its own right.

Birds sing because they want to get it on. It shows that they’re not afraid to announce their presence to predators, that they can put themselves at risk and survive. This is an arousing quality in the person who’s going to go out and bring your children worms to eat, as any female bird will tell you.

The ways of attracting attention have become more sophisticated, and intermingled with other cultural changes. Being a musician would once have been a sign of immense wealth for example, and though those days are clearly long gone the glamour remains.

To be in the moment of singing a song is to step outside yourself and approach something more primal and instinctive.

Away from the fussiness of words and the restrictions on self expression that blight us day by day. To stand up and make noise still seems thrilling, even in the sanctioned environment of a stage. Quite how this explains tweecore – the least sexy genre ever invented – I don’t know, but people in cardigans deserve love too I suppose…

The point is that personality shining through two otherwise identical tracks makes sense in this context. But If the idea of creating a ‘good’ song is for people to feel attracted to you personally, then you can you separate your image of a person from how you see their song? Think of poor old SuBo getting up to sing for the first time and the carefully stage-managed incredulity of the judges when it turned out her voice wasn’t as wonky as the rest of her. Or how often have you seen a picture of the new singer you like for the first time and been surprised at what you see?

So should this be ‘How to write a good song’, or ‘How to make a song sexy’? How do female musicians fit into this equation? In nature it’s usually the males that do the elaborate mating displays, after all. And is there some element of fetishising? I have been known to watch a band’s performance and be wracked with feelings of lust for the gear they use. I have heard synths described as ‘sexy’. Is the part of your brain that makes you love a song the same bit that makes you want to lick ladies’ shoes?

Next time: Why do all Pulp records include the instruction ‘Do not read the lyrics whilst listening to the recordings’?

3 comments for “How to write a good song: An introduction”