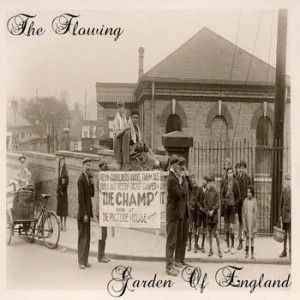 Every now and again it comes to pass that an album shuffles its way sideways into your collection and sets up camp in your consciousness without so much as a ‘by your leave’.  Suddenly you’re singing along to songs you didn’t realise you’d listened to multiple times, and the damn thing’s become a permanent presence in your listening life.

Thus was FFS’s experience with The Flowing.  They’ve insinuated themselves into our hearts and minds with conviction, creativity and out-and-out skill in spadefuls.  Their  debut album, Garden of England, is an accomplished, varied and addictive record that’s impressed us no end.

Favourite bits and pieces of the album include delicate, pared-down acoustic number ‘All Your Love’: bluesy, bittersweet lyrics over intricate, mesmerising strings; shanty ‘Seaship’, featuring ghosts, curses, and the French songstress Agathe Peyrat for a haunting – if not chilling – duet of sorts; and ‘Cm’, which would be happily at home on the soundtrack for a Western.  A really good Western.

The Flowing have played with Folk Award-winners Bellowhead (read our interview with these legends here) and they deserve to have a fantastic 2011, if you ask us.  If you like the sound of them, you can listen  here.  Now.  Go on.