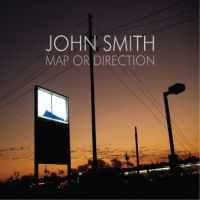 On a first listen, you would be forgiven for thinking John Smith was an old fellow sitting on his porch in the deep South of America, full of wisdom and worldly tales. So it may come as a surprise to find out that Mr. Smith is in fact a sprightly young fellow from Devon in England, who just so happens to sing with the infinite wisdom and worldly tales of a man twice his age. This new talent, who is beyond his years in so many ways, is currently taking the folk world by storm.

Map or Direction is the second album to come from John Smith and it brings with it a slightly darker undertone than his début, The Fox and The Monk. Travelling around America with nothing but a laptop and microphones for company, it was here in 2008 that Map or Direction was born. Recorded under bridges, in forests and in motel rooms, Smith gives his album true authenticity without breaking a sweat.

Opening with ‘Invisible Boy’ introduces the beautiful melancholy to the listener, preparing them for an emotional journey. The falling rain in the background cuts a lonely figure, while increased rhythms whet our appetite. ‘Hands’ becomes a showcase for Smith’s rippling guitar work, a running theme throughout. By ‘Axe Mountain’ we as the listener begin to see what Smith is truly capable of… starting Acapella, the heart wrenching story begins while guitars lazily chime in to give their piece of mind. Epic narratives fuse with passionate vocals to orchestrate a moving and emotion-filled song. Further examples of this can be heard in ‘Watch her Die’ and ‘Death and the Lady’ where slow motion drum beats and dramatic hand claps excel in intensifying the mood, while Smith exposes his languishing soul for us to hear. Light relief fills in the gaps, intended to link the stories in-between heartbreaks, each one holding distinctive merits of their own as perfect distractions.

This album will take you places you haven’t ventured before- and I wouldn’t expect a hand to hold while it takes you there either. Performing with such unhindered, raw emotion it’s no wonder John Smith has been described as possessing a “Common name and a rare talent”. The folk world are still reeling from what they’ve heard… and I doubt it will take the rest of the world long to catch up.