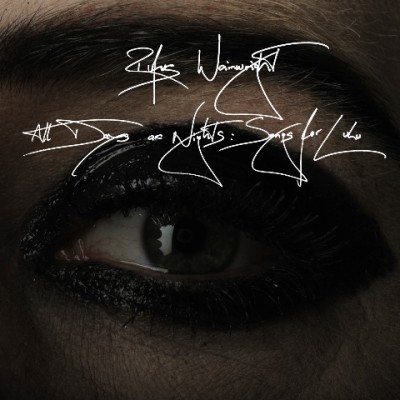 For some time now Rufus Wainwright has been an anomaly amongst the artists I like, and amongst those I own records by. I like Rufus – that much I know for sure. I like his voice, and his piano playing. I like him live, and I like how ridiculously camp he is. I like that he’s the sort of guy who will recreate classic concert hall performances by gay icons for no real reason other than he wants to. I like his family connections – that his family are all musicians, all feature on each other’s records and often feature in each other’s lyrics. But ask me to name my top Rufus songs and I’ll get stuck after just three or four songs. Most of my favourite Rufus Wainwright songs are, in fact, him covering other people. On average, I only really love one song off of each album he releases.

Beyond these occasional wonders, his songs are just – aimless. Today I’ve been listening to his new record, All Days Are Nights: Songs For Lulu. Though every song is undeniably pleasant, none of them particularly stand out. The piano is lovely, and separates Wainwright from many other artists – it reeks of classical training in a way Marina & the Diamonds or even Ben Folds will never manage. The vocals are also wonderful to listen to, smooth and unassuming. But the songs are not a sum of their parts. It’s a problem that persists through much of Wainwright’s works. Too often his songs are nowhere ballads – songs that tell stories about nothing much in particular. Rufus Wainwright is not a man to be shackled by pop conventions, but this very trait leaves his songs drifting about aimlessly.

What makes pop songs so great – whether they are by vivid young things like Lady Gaga, or more musically mature artists like, say, Jens Lekman (who falls very much into the category Wainwright works best within) – is the hook and the melody. When Wainwright uses these he produces his best works, songs like ‘Oh, What A World’ (to which the hook is Ravel’s ‘Bolero’) or ‘Cigarettes & Chocolate Milk’. When he doesn’t use the hooks to which he has clear creative access, we get the songs that fill his records – beautifully played but often unengaging pieces that fail to demonstrate the artist’s true ability.

2 comments for “Album: Rufus Wainwright – All Songs Are Nights: Songs For Lulu”