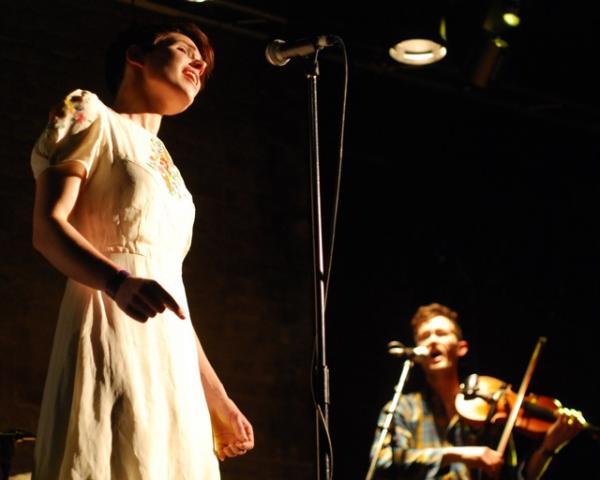 In the packed, ambiently lit space of the Roundhouse Studio Theatre, the audience sat on the beautifully clean floor and waited patiently for Firefly to take to the stage.  Crowds as reverent as this are hard to find, but they’d gathered in this darkened room in Camden for one purpose: to have their socks blown off by this vital, indefinable band.

This astonishing five-piece describe themselves as ‘nu-folk/alt-classical’ which immediately brings four genres into the mix.  Add to that a smidge of experimental jazz, some vocal experimentation in the style of (a sane) Kate Bush, and a Javanese gender (which must be seen to be understood) and you have as heady a musical mix as the Roundhouse has ever seen.

Each and every one of these musicians would be a worthy addition to any orchestra, but in this particular arrangement each pushes their instrument of choice to its limits, on occasion hitting the highest, most thrilling pitch of perfect.  This is music that paints sound pictures and takes the audience in myriad directions at will.  Some of the best, most effective experimentation is delivered by the vocalist, Bea Hankey, whose gasps and shrill shrieks react to and mimic the violin on tracks such as ‘I Feel’.

Lyrical highlights were ‘Arthur and the Great Element, about James (guitarist)’s son’s first encounter with the mighty sea and ‘O Thou’, a choral setting to music of the e.e. cummings poem.

On this particular night, each song was followed by a respectful space of silence the like of which I’ve only ever experienced in the most stunning of theatrical performances.  Firefly are like no other band I have seen before, which is jolly fortunate, as it is their unique perfection which makes them so very worth hearing.

Have a listen to this brilliant, exciting band on their MySpace page here.

or, even better, catch them live in London:

8pm Thursday 13th May, 2010: Cool as Folk Upstairs at the Ritzy Picturehouse, Brixton (for FREE)

← The Bundles: the ultimate Antifolk team tour the UK
Opera glasses and picnic hampers at the ready for Rufus Wainwright →