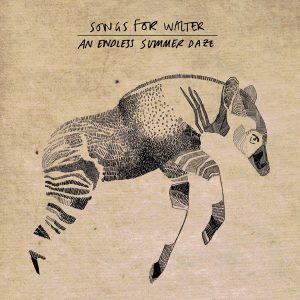 Songs For Walter was originally the name Laurie Hulme gave to a collection of tracks about his grandfather, songs that garnered a great deal of praise. He also received his share of raves from many of the Radio 6 Music DJs, setting up huge expectations for An Endless Summer Daze. His new collection covers far more territory, incorporating everything from Orwell to ET hunters.

The album’s title originally seemed destined for the trash bin, but was saved at the last minute. Recorded at Manchester’s 80 Hertz studios with Phillip Kay at the helm, a number of manipulated homemade instruments help to give these tracks their own unique sound. Yet its sound is far more cohesive than on Songs For Walter. Acoustically driven, they seem gentler, just like a summer day.

‘I Don’t Know Who You Are’ may well be the story of how Hulme ended up recording many of the basic tracks in Edinburgh, “By absolute fluke, I ended up staying in an architecturally award-winning modernist house,” he said. “I set up in the owner’s study and laid down the tracks.”

While Hulme doesn’t sugarcoat his messages, the sweetness of his music certainly makes it easier to swallow. Songs develop slowly, putting pieces together one at a time much like a jigsaw puzzle. With the stakes so much higher, it’s remarkable to discover how varied these tracks are. A major unemployment protest in Salford becomes the subject of ‘The Battle Of Bexley Square’.

Hulme’s process seems to be a bit different than that of the normal singer-songwriter. “I’ve never wanted to write about love, it feels so unimaginative,” he said. “I like writing about peculiarities in people, personal stories, the bizarre world we’re boring into and strange things we do.” In a society where people often feel isolated and alone, ‘Earwigging‘ recounts how someone is always watching and listening to us. It’s the stuff of nightmares, yet musically highly inviting while it worms its way into the brain.

As the gentle breezes of summer turn to fall, Laurie Hulme has given us music to soothe the savagery that often lives inside the heart of man. It’s a rare accomplishment, one to savour, as the winds grow cold.