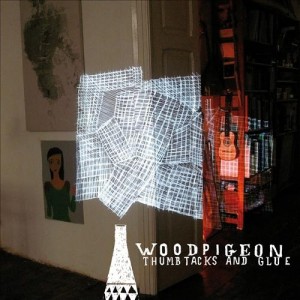 Mark Andrew Hamilton has the notion in Thumbtacks and Glue that what characterises one’s life is a myriad of little things, rather than one or two great experiences, influences or tragedies. He has mentioned the parallel of Gulliver in Lilliput, held down by a web of little strings. And so what finally emerges is a multi-coloured collection of images and musical ideas, rather than a single whole with a common theme. Perhaps this complexity is to be expected from a man whose background is in the wide open spaces of Calgary, who originated Woodpigeon while living in Edinburgh, and who now makes his home in Vienna. (And why would one expect anything easy from a band, if one can call them that, who started life named Woodpigeon Divided By Antelope Equals Squirrel?)

Hamilton opens the album by telling us that “the saddest music in the world (is) the songs we sing that don’t get heard”. One knows immediately that what follows will need careful listening if one is to catch his ideas and appreciate his musical flourishes. They come in a variety of styles, sometimes gently strummed, sometimes lushly orchestrated, and occasionally – in the two most memorable songs, as it happens – with a sharp electric edge. The first of these is the urgent ‘Children Should Be Seen And Not Heard’, driven forward by drums and bursting out into its exuberant chorus. The other is the mysterious ‘Sufferin’ Suckatash’, with its imagery of being enveloped in a dense forest, which breaks in its second half into an uplifting sort of chorale in the highlight of the album. These are two wonderful songs. Throughout the album, Hamilton’s delicate voice gives an interesting fragility to pieces that sound (often like Elliott Smith) as though they have been so carefully constructed, written and re-written until they are just the way that he wants them.

The problem with the album is that on so few occasions does the strength of the melody lift one out of the density of the songs. Lyrically, many are close to impenetrable – only one (the folksy ‘As Read In the Pine Bluff Commercial’) attempts to tell a story, and even then it’s hard to know what to make of the father who tries to bring his dead wife back from the grave. The rest of the time one is restricted to shadowy glimpses of images that Hamilton briefly shows us, and settings that are often interesting but too rarely memorable (even in ‘Red Rover, Red Rover’ and ‘Edinburgh’, apparently due to be singles from the album. Much more forceful is the defiant ‘Hermit’, which is allowed to swell into a majestic crescendo of vocals and fuzzy guitars).

Taken as a whole, this is an album for those prepared to listen hard and to look for the little details that the Thumbtacks and Glue hold together. Quite probably this is just as Woodpigeon intended.