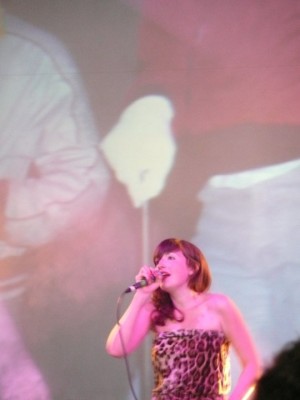 FFS wrote precisely one memo-to-self during this show: “Jeremy Warmsley is wearing the best shirt ever”.  The review should actually end there: Mr. Summer Camp’s clothing selection alone should be enough to convince you to go see them play live.  If that isn’t reason enough, you could be persuaded by all evidence pointing to them being properly lovely people, making brownies and recording audiobooks to distribute during the PledgeMusic campaign for their new album Welcome to Condale.

Except at the start of this gig, for just a minute or two, they don’t seem lovely at all. They seem a little, well, unnerving. It’s an attention-grabbing opening – Summer Camp begin ‘Better Off Without You’ in the middle of the crowd, strolling round with an acoustic guitar and no microphones.  Several of the audience members seem unsure quite how to react as Elizabeth Sankey walks right up to them to accuse them of being “so annoying when you whine”.

Halfway through the track they jump up on stage, plug in the electrics and revert back to the ‘80s/futuristic sound of the recorded album. Apparently Elizabeth has a sore throat, but that doesn’t stop her belting out ‘Welcome to Condale’, ‘Round The Moon’ and ‘1988’ in quick succession.

The slick guitar / keyboard /samples, beefed up on-stage by William Bowerman’s drumming, play out against a projected backdrop of classic ‘80s movies. FFS spotted Teen Wolf, Flashdance and that one with Ricki Lake in; but was particularly impressed by ‘Veronica Sawyer’, a track describing a truly dreadful teenage party, soundtracking footage of – yes, you’ve guessed it – a hideous teenage party. Clever.

The audience revels in the performance – it’s a free gig for Liverpool Music Week, and the venue filled up about three hours before Summer Camp came on stage. There are some very trendy-looking girls and boys here, all seemingly word-perfect, and all very much up for having a good time. The tempo builds, until ‘Done Forever’, with its soaring female vocal and Chicago House vibe, leads to a bit of a sweaty mini-rave. We come down gradually, via ‘Brian Krakow’ and ‘Ghost Train’ to ‘Losing my Mind’, again performed acoustically with an endearing whistling accompaniment.

Ending the night with ‘Summer Camp’ into ‘I Want You’, it’s a confident and amusing performance.  They’re touring the UK again in March, including a date at London’s Scala. Hopefully Jeremy will wear the same shirt, if we ask nicely.