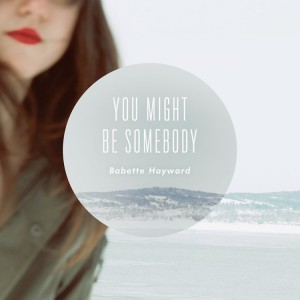 It’s been three short years since Laura Marling released her brilliant debut Alas I Cannot Swim. In that time, Marling, along with her contemporaries, has helped to forge the folk revival. This has seen, amongst others, Marling, Fleet Foxes and Mumford and Sons swamp the radio airwaves, decorate the upper echelons of the music charts and receive recognition at awards ceremonies. Are we now beginning to see first wave of acts inspired by the success of the folk revivalists? If so then, Canadian trouvère Babette Hayward can certainly be classed among this second wave of revivalists.

Her voice is a little like Gillian Christie, of For Folks Sake’s New Bands Panel fame, who in turn sounds not unlike Laura Marling. There is also a hint of Cat Power, in the way that Hayward lets her vocal melodies hang, adding a delicate and poignant tone to her music. As for the music itself, ‘Star in Me’ has a chord change that could have been born from the Moldy Peaches’ excellent ‘Anyone Else But You’. ‘Spinning Out of Control’ has an introduction that recalls Tracy Chapmans ‘Fast Cars’ and a bridge that brings back memories of the Stereophonics ‘Hurry up and Wait’.

What I really like is that Hayward starts with strong song writing which is simple, but never repetitive or derivative. She is at complete ease with her approach to crafting music and is confident enough in its quality to add string elements, such as in ‘Break Line’ and the brilliant ‘All in Good Time’. Consequently she is able to sound like a number of different artists and also retain her individuality. This is a very accomplished and enjoyable record, one that fans of the aforementioned folk revivalists will certainly enjoy. The question one might ask, having laid such strong foundations, is ‘Where next for Babette Hayward?’ My answer would be ‘To England, to play some gigs’!