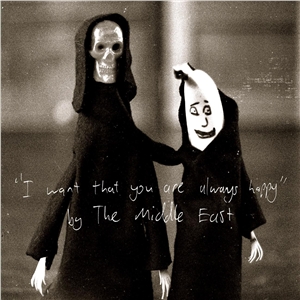 You remember The Middle East, right? You know, that band from Townsville, Australia who released an EP in 2009, The Recordings Of The Middle East, which was full of effortlessly intricate beauty and tunes that burrowed deep into your brain? You remember that, right? Well this is nothing like that.

Make it to track four and your reward is ‘Jesus Came To My Birthday Party’, described in the press notes as “a blast of unadulterated joy destined to seduce the mainstream”. Possibly among songs about the plague and the destruction of communities, this tale of religious disillusionment counts as a blast of unadulterated joy, but it’s conceivable it mightn’t elicit quite the same description from fans of Katy Perry and Glee.

I Want That You Are Always Happy is not a great album, but that’s not to say it’s devoid of great music. ‘Land Of The Bloody Unknown’ is a jangly winner which seems to herald a change of tone that never quite arrives, ‘Very Many’ builds in a fashion which will please fans of the EP, while ‘Hunger Song’ is a genuine moment of light amid the shade. Perhaps the best is ‘Mount Morgan’ which takes country influences and hauntingly tells the tale of town destroyed when gold is discovered there.

But none of it hangs together. Clearly there’s nothing that says an album can’t be depressing, but what really disappoints here is the disjointed nature of things. The beginning sounds like the end, the end sounds like the heart and the whole album feels like the tracks have been spewed out in random order rather than agonisingly crafted into a coherent album. Perhaps the Middle East had another killer EP on their hands here, but as a 14-track album it doesn’t quite justify the wait.

4 comments for “Album: The Middle East – I Want That You Are Always Happy”