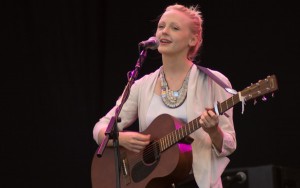 Twice Mercury-nominated folk star Laura Marling has spoken out about the difficult gigs she played in India on tour with Mumford & Sons.

On a mini documentary Goodbye India, now playing on her website, the 20-year-old says: “India was totally exhausting on pretty much every level. I didn’t realise until I got back how much everything had affected me.”

Laura played a series of shows in India with Mumford & Sons last December, as part of the British Council’s Soundpad project.

She says in the documentary: “The gigs in Mumbai and Delhi were amazing. They were outside amphitheaters – really beautiful settings. The rest of the gigs we played were tough for me. It was tough on the soul as well because no-one was listening. A couple of them were in restaurants where we were the entertainment for the evening a couple were in really Western pubs and bars where no-one wanted to listen.”

“I’m never ungrateful for anything I do because all of it is an incredible experience but it wasn’t what I expected it to be. I lost my patience a few times.”

“I’ve never experienced anything like that last gig in Calcutta. I don’t write songs that people can dance to but I wouldn’t write songs if I didn’t want people to listen to them. Apart from the 5 ex-pats at the front nobody else wanted us to be there. But this was our last gig and I thought ‘I’m not going to be defeated by this’. I only played five songs, but I screamed them.”

In a recent radio interview on US radio station KRCW, Laura alluded to the difficult gigs, but said that she enjoyed the collaboration with Rajasthani musicians the Dharohar Project, which was released on 5th July.

4 comments for “Laura Marling speaks out about tough India gigs”