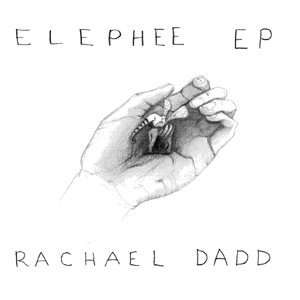 Rachael Dadd’s new EP Elephee sounds delicate and raw, precise and spontaneous. It’s a beautiful collection of songs that could have been recorded just a few hours ago or sometime in the early 1970s. Imagine finding a vinyl record in a second- hand shop and realising you have found musical treasure, you would listen to it over and over and then tell everyone you knew to try and find it- finding this EP is a little bit like that.

Elephee consists of five delicate, spare tracks like lullabies for modern life. Rachael Dadd can play any number of instruments but here she mostly just uses her ethereal voice and a guitar (although there are also some other vocals and some very sweet banjo, notably on track two ‘Owl Ears Wait’).

Rachael Dadd is loved by those who have found her and should be found and loved by many more because she looks at life slightly to one side. Her lyrics make you think, as all good lyrics should, but she has a way of articulating something you might have thought of but hadn’t quite realised. So in the opening song of the EP ‘Elephants swimming’ you begin by thinking how magical it must have been to watch these grey giants of nature play in the water until you realise the narrator was watching them on tv and the song changes. Similarly in ‘Your Storms’ Rachael makes human emotions like the weather in a new way, not with the clichés of being under the weather, but with you actual body containing a storm.

All of these songs paint pictures- some are like the music can be: pretty and light. These images include the idea of wearing a ‘new second-hand cardigan’ for example or your heart knowing someone’s hand. Some of the songs and their lyrics are more haunting though, in the ghostly, more sinister sense: swimming in rivers and swallowing spiders or being caught in voids.

Now that I have Elephee I feel I have always had it and wouldn’t want to be without it. I think I will listen to these songs for many years to come and the EP has only made me hungry for more work from Rachael Dadd.

Elephee is released on CD on September the 15th and you can pre- order it from Rachael’s shop here. Each copy will be hand numbered and as with her previous releases Rachael will be designing the artwork herself.

Rachael will be launching Elephee on the 5th of September at the Luminaire in London (tickets here). She is also playing in lots of other lovely places in September including Winchester, Cardiff and Brighton (full details here).