After Tom Williams & The Boat’s LP Easy Fantastic was released last year, Tom took some time away  from the band to work on his solo project. The video was made from footage shot during the recording of the mini-album.

New Guitar features seven new songs written over the past two years that were put to tape at 2kHz Studios. Tom is accompanied by on the record by Ant Vicary from The Boat and Sarah Maycock (piano), Fiona Keeler (vocals) and Catherine Black (cello).

The record was funded by a pledge music campaign and will be released on Tom’s own Wire Boat Recordings label on 23 March. 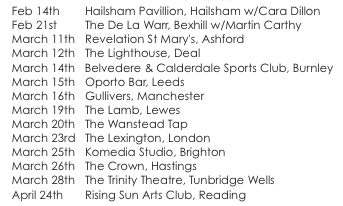