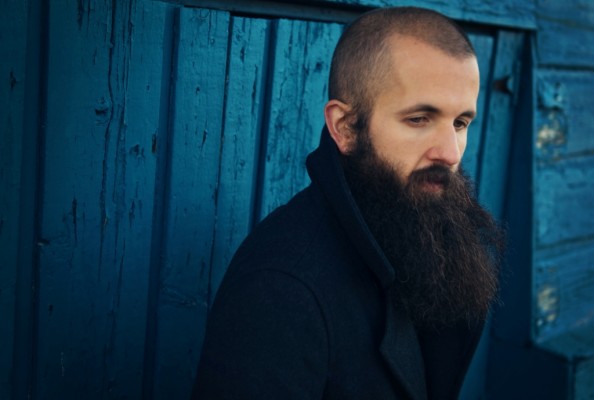 1. Hello, please introduce yourself and your music to the uninitiated

I’m a songwriter and psychotherapist. Those are my two things that I think are most descriptive of me. The music is folk music with some other stuff on their once in a while to make it not so boring once in a while.

2. Tell us a bit about your latest/upcoming release

Everything that I write and put out before this was extremely depressing, very dark and morbid. I wasn’t doing that for any reason other than what I was going through at the time. This one I wrote when I finally decided I was sick of being unwell and wanted to get some healthy things back in my life. So it’s probably the most positively tinged one. A new listener will probably still find it pretty melancholy, but to me it’s pretty positive.

3. What has been your best ever gig/tour?

I suppose the most fun one was the first time I ever came to Europe and the UK. It was just myself and a friend playing guitar. We had no idea what the hell we were doing, just driving around. We knew some of the language in different countries, but really very, very little. It felt like a big deal because we’d come to a place we’d never been to before and it felt like a victory that we didn’t die or anything. Half the shows were sold out and it was very enlightening and a paradigm-shifting experience.

4. What is the worst thing about being a musician?

Ah, really, it’s all candy and sunshine really. It’s ridiculous really. Last night I’m eating a kebab and fries and watching my manager toil away on his laptop until the early hours in the morning and I’m just watching Law and Order or something like that. It’s kind of ridiculous. I guess the worst part is trying to rearrange your life to the fact that your home is travelling. I’m rather a homebody. When I was younger I never thought about leaving my home town, I’m one of those rare strange birds like that. So that’s the part that gets rough when you haven’t seen your own bed for three months and you’re lucky to get a week in it. But other than that it’s pretty fucking perfect.

5. What music besides your own do you listen to?

Mostly predictable stuff I think. The same genre, Sufjan Stevens, Nick Drake, and so on. I like very confessional, reflective singer-songwriter stuff usually, but on tour sometimes you need a little more tempo to keep you going, something like Passion Pit or even a bit of pop radio to keep you going behind the wheel.

I guess it’s the very dark things, the ignored things that most people don’t feel comfortable talking about. If there’s an 800-pound gorilla in the room, I like to be the one that points it out. Sometimes people feel awkward or pained by it. I don’t get enjoyment out of that, but I think it’s a healthy thing to do.

7. If we gave you a billion pounds what would you do with it?

I think I have that conversation about once a week. I’d probably spend about 80% of it on vintage guitars, then I’d put the rest of it in the bank and enjoy living off the interest. I enjoy being frugal. It’s the least rock ‘n’ roll thing anyone ever said. I’m kind of in the wrong profession, but I fell into it.

8. Which of your songs is your favourite? Do you have a least favourite?

I guess it’s one off The Sparrow And The Crow record, called I Don’t Feel It Anymore. There’s a couple of things I wrote where I felt like they came from somewhere else, if that’s not a strange thing to say. That one more than anything else felt like I stole it from somewhere. When I finished writing it, it didn’t take long sitting there and I played it back and it sounded like someone else’s song. I’m very proud of it, I feel like it communicates exactly what I want it to more than anything else. Most songs you finish you feel like you almost got there. That one felt really complete.

9. Do you have any exciting plans for the future?

Playing music, I guess. I’m honestly so thrilled to have a new record that’s not just about divorce and relationships and all that stuff. It got very weighty to be playing those songs all the time, very personal, reminding myself of a lot of bad mistakes. The idea of going out with new songs that have some tempo and a little bit of hopefulness is very, very encouraging.

10. If someone wants to hear your music, where should they start?

I think The Sparrow And The Crow is the place to start. The first one is, er, kind of shit. The second one’s good, but Sparrow is a bit more accessible. The songs are cleaner. I think the average length of songs on Goodnight are more than five minutes. It’s a bit ridiculous. But Sparrow is the most communicative.

Gold In The Shadow is released next month.