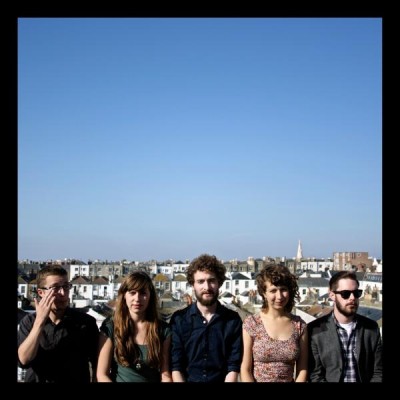 Having supported almost everyone you could possibly think of, from Peggy Sue and Grizzly Bear, to Beach House and Sons of Noel and Adrian, this band hardly need introducing. Nonetheless, should you have yet to hear this, I feel more than obliged to post this. Laish, curated by heroes from the Willkommen Collective, sing songs of brutal honesty, decorated with areas of playful humour, and of the utmost charm. I was lucky enough to witness Danny Green, front man of Laish, play a garden set earlier in the summer, and I was more than blown away by what I heard. So, I asked Danny to come down and speak to FFS on behalf of Laish…

Hi, I am Danny Green from the band LAISH. I write the songs, play various guitars and sing. LAISH is my obsession. I spend every waking hour inside every aspect of this project. It isn’t healthy. There are five tremendous people in LAISH. Patrick, Martha, Emma, Dan and myself. We love each other like siblings. Our WAGS and HABS are very understanding. Our songs seem to vary from dark night of the soul laments to joyous comic stompers via the tributes to love. Lyrics are important to me in that I appreciate good lyrics and I try my damned hardest to get something across. I get closer to it each time we play.

Tell us a bit about your last/latest single???

Our most recent release is called Obituaries EP. The EP comprises songs addressing life and death. Moving through four songs beginning with an intense burst of curious energy with our full loud band through to a lonesome small song written and recorded on a frozen January night about a friend facing his Saturn Return. This EP also has a song called Leave Me to Lie Alone, written and passed to me by the singer, Animal Magic Tricks. She said she had finished with it, would I take care of it for her? I said yes of course.

What was your best ever gig???

So many of the glorious pub gigs stay with me. The raw satisfaction of stamping about and making harmony right under your nose is a hard thrill to beat. However! Playing the mainstage at the first No Direction Home Festival this year has to be the best. It was an exhilarating experience and an important milestone for us. I was really like a child in an adventure playground that weekend. We played three sets, sold out of all our cds in the Rough Trade tent, and raced around backstage high-fiving some of our heroes. It was a thrill.

The shortness of life. Other art. Going to places. People.

If you won a billion pounds what would you do with it???

I never play those games. But if I did and I won, I would no doubt be hurled headlong into oblivion.

A new song: Warm the Wind (see below). The words came out in one go, which is rare for me. It also has a swear word in it, which is a first too. I’m of the school that swearing is a lazy substitute for an emotion that could be better expressed. In this case I made an exception.The melody seemed to write itself. It is simple but satisfying to play on the guitar. I still wonder if I have unwittingly stolen it from somewhere, but it’s too late to worry about theft now. I think this song will have a life of its own.

To see the world, writing, playing and recording as I go. It’s the only thing I’m any good at any more, I am ashamed to say. I plan to get better at managing the whole thing. The learning curve is steep but I am learning. Also I ought to dust off my table tennis bat. I am a World Champion of Ping Pong in my own head. I really should put my money where my mouth is.

There’s a really great Israeli band called The Angelcy I have played a bunch of gigs with over the past few years. They sing in English, which makes my life easier. The singer, Rotem, has tremendous raw energy and his band are strangely reminiscent of LAISH.

For more suggestions you could listen to my radio show. It’s broadcast monthly on Simple Folk Radio. But it’s not just folk…