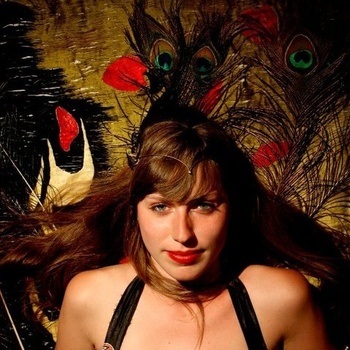 If you like your folk dreamy, stripped-down and devoid of gimmicks, we suggest you check out Emma Gatrill. Falling somewhere between Hannah Peel, Alessi’s Ark and Serafina Steer, harpist Gatrill weaves vocals and melodies together in understated, beautifully-crafted patterns. Whether singing about unrequited love or the the dangers of a cruel world, she is darkly enchanting.

My name is Emma Gatrill, I write songs on the harp. I enjoy telling stories, fictional and true.

Tell us a bit about your next record.

I’m releasing my debut album on the 14th May through Willkommen Records. It is called Chapter I. I recorded it in a derelict chapel in Brighton over two separate weekends last year. I will never forget the experience, it was so cold, there was very little electricity, I remember my breath filled the room like mist. I’m excited about sharing it with the world.

My favourite show I have ever played was in a tiny little cafe in Leipzig supporting Ichi and Rachael Dadd last September. There were piles of books stacked all around the room, on an amazing black and white tiled floor. I only had my little harp with me then so was sitting on the floor with the audience all huddled around. It was one of the first shows I ever played and I remember looking up and seeing so many pairs of attentive eyes and warm faces. That night has always stuck with me.

That I can’t survive without my diary! I have lost it two times now and I’m useless without it. I guess it’s my own fault for playing with a multitude of musicians but I do really love playing with them all.

Also, I can’t just write a song, it has to come to me. I have days when words swarm around my brain and I can’t focus on anything but them, their meaning, the sounds of the words, how to express a feeling through those utterances. Sometimes I think that when I’m in these kind of moods I’m not very good company!

A lot of what inspires me surrounds me. I grew up in the countryside on a farm and now reside by the sea in Brighton. Natural sounds and images have always been a big part of my life and seem to creep into the music I write, especially the forever-changing seasons; the crunchy leaves underfoot in autumn, snowy hilltops, new-born lambs, long summer evenings. A lot of the lyrics I write come to me whilst walking, taking in the world around me. We are after all very small in the grand scheme of things but that doesn’t mean that what we feel isn’t important.

Music and money I find hard to relate, obviously we need money to survive but music to me is everything that money isn’t. I do however really like the idea of having a big farmhouse in the countryside where my friends could come and live without the worry of money, where we could all collaborate and record music together.

At the moment it’s a song called ‘Skin’, I wrote it after recording the album but it’s my favourite because it makes my whole body move when I play it and it’s completely unintended. It always takes me back to the day I wrote it. Marcus Hamblett has written an amazing guitar part for it too!

I am hoping to record some more songs soon. Spring has been good to me. Also I have just bought a vibraphone!

Rozi Plain is amazing, I’m extremely excited about the arrival of her forthcoming album. Also keep your eyes on a lovely lady called Kristin McClement, her next record is without a doubt going to be incredible.

Debut album Chapter 1 comes out 14th May via Willkommen Records. Official album launch is 10th May at Saint Barnabus Church with Rozi Plain and Dearwinesburg, hosted by Folie à Deux.