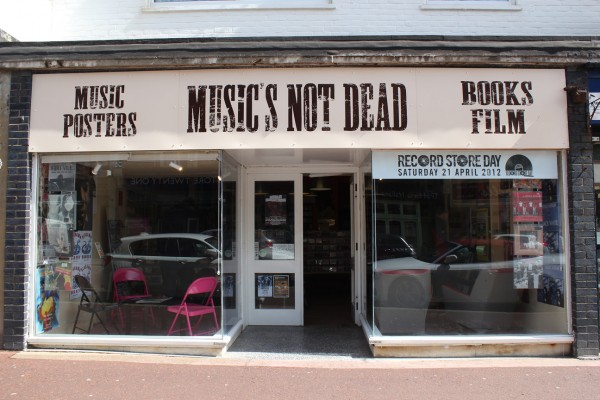 Not the most obvious place to open up a new record store.

But that is exactly what locals Del Querns and Richard Wortley did last year as they opened their doors just a few hundred yards from the seafront.

The name of the shop stands as a rallying cry for their mission – Music’s Not Dead.

“If you don’t give people the opportunity to find music in a shop environment it becomes less important,” says Querns.

“When I was putting my record collection together it was from being in a record shop, flicking through the racks, and talking to people who could recommend stuff.”

Put simply, everything that online shopping can’t do.

But while Amazon might be a dirty word to many in the independent music retail sector, it actually gave Querns and Wortley their break, as they raised the money to open the shop by trading on Marketplace for a year – meaning they were able to bypass the potentially tricky process of getting a bank manager on board.

With a background as music wholesalers, they came armed with a knowledge of the industry that could protect them from making costly mistakes when getting their business off the ground.

Not that they haven’t had a few surprises since opening up.

“We’re amazed at how much Fairport Convention we sell,” Querns says with a laugh.

“We probably shift 10 of their albums a week, which is amazing for a town like Bexhill. But then we don’t sell any Madonna at all – especially the new album. 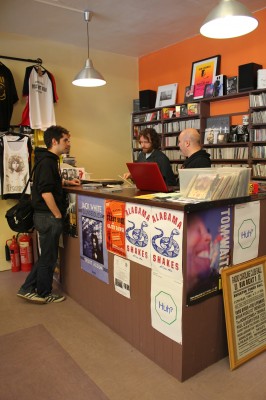 “I’ve been amazed at the amount of folk and Americana that we sell. Our biggest seller since we opened is King Creosote and Jon Hopkins album, Diamond Mine. We’ve probably sold close to 100 copies of that.”

In the few months they’ve been open, Querns and Wortley have built up a healthy number of regulars to keep the till ringing.

But, as several of the updates on their Facebook page will attest, they also have a number of visitors who seem to have forgotten what record shops are all about.

One recent entry reads: “Customer Of The Week

“Man walks into the shop talking very loudly on his mobile phone, looks at me, then says into his phone, hang on a minute….Then says to me can you turn the bloody music down…i’m on the phone here”

Querns says: “I think people have forgotten how to shop after Amazon. They come in and say, ‘Oh, there’s too much choice’. Maybe it’s odd thing to say, but we wanted to create a nice atmosphere where people can enjoy themselves.

“I used to work in a shop years ago that was quite elitist but we wanted a welcoming place.”

They shop has a sofa where you can lounge and read the latest music magazines, talk about the latest releases, or find out who might be next to join the increasing list of bands scheduling the recently renovated De La Warr on their tours.

“We knew there’s a lot of like minded people around who still want to go out and buy music, and last year seemed the right time to do it,” says Querns on why they finally took the plunge.

“We got the feeling Bexhill is on the up, and last year was the first year in a long time that more record shops opened than closed. We’ve had a hell of a lot of good will towards the shop.”

This year will be their first Record Store Day, and although they’ve got most things right so far, Querns and Wortley admit they’ve no idea what to expect.

“We’ve had people calling us up asking what hour of the morning they should get here,” Querns said. “We really don’t know what to tell them.”

Music’s Not Dead is located on 71 Devonshire Road, Bexhill-on-Sea. You can find them on the web here and read their highly entertaining Facebook page here.