More than a year after making a pledge to only buy his music from independent record shops, FFS contributor Rory Dollard tells us he’s never looked back.

Free-range eggs instead of the battery hen stuff, please. I’ll take some properly sourced, decent quality Fairtrade coffee over the dirt cheap instant guff. ‘Responsibly fished’ tuna if possible, as I don’t feel cool about chomping down dolphin-mayo sarnies for lunch. And I have it on good authority that if you want some decent grundies you’re better advised to head for Marks and Spencer than Primark. I’m not at the M&S stage of life myself, but I get the point.

Which is why I buy my music exclusively at independent record shops.

Cards on the table, it’s cost me a few more quid than if I’d done all my spending on the high-street but it’s a principle most of us are familiar with in other walks of life. Pay a bit more…get a bit more.

Buy a sausage roll at Aldi and you’re going to get your fair share of backside and lips. Get down to the local butcher and you’re probably heading for a slightly sounder cut.

But for too long the shiny lights, heaving racks and ‘buy one album you really like and get three more you probably won’t for an extra tenner’ offers of the major chains have ruled the day.

The demise of Virgin Records and the recent struggles of HMV suggest they too have come to a troublesome pass, but it isn’t as though the masses have all headed to their local indie.

Instead, the peer to peer websites and the online entertainment shops are hoovering up most of the slack.

Now, I’m no lifelong puritan. I’ve got brilliant memories of hunting out Bruce Springsteen albums in Our Price. Meeting my mates in town as a kid meant, without fail, meeting them in the Virgin Megastore.

Now I’m confessing, let’s go full throttle. I spent hours messing around on Play.com, CD Wow, Amazon, looking for cheapo bargains and trying to save a few pounds on new releases by seeing which company was willing to go the extra mile. Or the extra 50p off, as it was.

I’m not much of a computer whizz but I was in on the ground floor of the Napster explosion and I had a little dabble with torrents in latter years.

And you know what? None of it was great. I got my hands on loads of music – a lot of it brilliant – but bundles and bundles of rubbish as well. When things are available at the touch of a button for next to nothing (or nothing, depending on your tech skills) it’s easy to just keep on clicking.

I found myself buying things I had no feelings for at all just because they were £2.99 and the postage was free. Then it was packaged up in a soulless warehouse somewhere ready to be left on top of my fridge for the rest of its natural life.

Something had to give and on New Year’s Eve 2010 I made a resolution to only buy from independent shops for the whole of 2011.

After a couple of months, any timescale was thrown out of the window. This was forever.
Here’s a few reasons why.

1) The element of anticipation was back. For the first time since school I was waiting to get hold of my chosen albums and it was great. Instead of having something drop through the letterbox every week or so I was jotting down a list of things that interested me and building some excitement before I was able to get the time to go and get them. 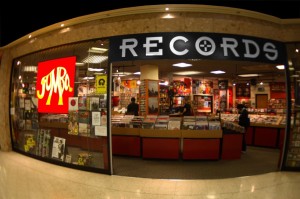 2) There’s some serious expertise kicking around in these places. Like a good bookshop, a proper record store is filled with handwritten cards advising you to buy this or listen to that, top 10 lists and albums of the week. I’ve already scored plenty of top tips from these (hats off to the guys at Jumbo Records in Leeds) and I’m expecting plenty more. Good luck trying to get the same kind of input at your checkout screen on Amazon.

3) It’s brought me to some cracking new places. Any weekend trip away now is prefixed by a search for the nearest record shop. Bristol, Belfast, Cardiff have all come up trumps. I’ve had a few dead-ends along the way too, but the thrill is in the chase.

4) I’m paying more attention again. At school I used to relish the journey home on the bus, perusing the inlay cards and cover art for lyrics, collaborations, witty comments in the thank yous…the whole shebang. When I got it home I’d sit down and actually listen and then, having put so much effort into getting hold of it, I’d listen to it once more. It’s good to care again.

Okay, so here endeth the sermon. But give it a try. Check out your local shop and see if they’ve got that obscure record you’ve been looking for. Maybe they haven’t but they know something that’s even better that you really need to listen to.

You may not be convinced, but just remember if you’re not you’re essentially a hen-caging, coffee-farmer starving, dolphin-murdering Primark pants wearer.