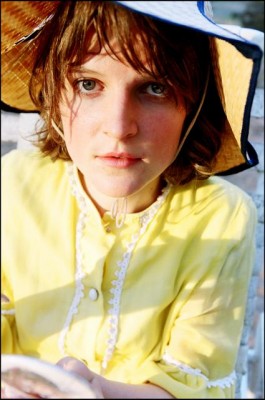 In the second in our series of interviews with Schmercury award nominees we speak to Devon Sproule – a Canadian-born musician now living in Virginia, US. As well as her beautiful albums, she’s an absolute joy to watch live, with a natural musicianship and easygoing charm. FFS’s writer Chris Woolfrey called her latest album, I Love You, Go Easy, “a set of gorgeous melodies and a sense of irony that never lets the performer or the listener indulge unduly”

For Folk’s Sake: Congratulations, youíve been nominated for a Schmercury Best Album award. How do you feel?
Devon Sproule: Great, thanks!  I’ve been moving, so I haven’t been on the computer as much.  It was great to fire it up, here in our new tiny place, and see this.  Nominations mean you’ve pretty much already won, right?  I’m totally into pretty much already winning.  How do YOU guys feel?  Is this your favorite time of year?

Yes! It’s lovely to have a reminder of  all the great music we’ve heard this year… Have you paid much attention to the Mercury nominations this year? What do you think of them if so?
No, I haven’t, but now that you asked … well, I haven’t listened to PJ Harvey in a long time but that probably has more to do with where I’m at than with her ongoing awesomeness.  My husband Paul saw her at Glastonbury a few years ago and was totally blown away, has talked about it repeatedly since then. The only other person I’ve heard on the list is James Blake.  I saw a really sparse, sexy video of his a while ago that I thought was pretty great.  The song too.  But heard another of his songs on 6 Music yesterday that I didn’t like very much at all.  Did y’all have a favorite?

Hurray for you listening to 6music! My favourite record was probably Anna Calvi’s but we’re also pretty happy with PJ’s victory at FFS… Aside from your own, what ís your favourite album on the Schmercuries list?
I don’t have a relationship with any of the other albums in the list but I’ve been really curious about the Low Anthem since I briefly toured the Hadestown record with Anais Mitchell (which Ben sang wonderfully on), so I think I shall listen to that first.  And as long as I don’t listen to the words too closely, I am almost always taken somewhere by the Fleet Foxes.  I heard the front fellow say a while back in an interview that he was gonna work harder on his lyrics, so perhaps for this record he has.  All in all, I’m really happy to be introduced to a bunch of new good stuff!

What album (released in the past year) have we missed off the list?
Cary Ann Hearst’s Lions & Lambs

How do you feel about I Love You, Go Easy now it’s been released to the world?
Well, it’s still coming out in the US, where I’m from, so I’m excited and nervous about that.  And it was made in Canada, where I’m also from, and I’ve always wanted to tour more up there.  So yes, the fun never stops.

Did you know it was special when you were making it?
Yeah, the sessions were really, really satisfying.  I hadn’t met any of the people I worked with beforehand – Sandro Perri, who produced it, or The Silt, who were the musicians – so it was a bit nerve-wracking.  But then everyone seemed to care so much anyway, about doing a good job.  And everything was really loose, kind’ve how you hope recording will be.

What do you think about the critics and fansí reaction? Was it what you expected?
Well, the record is pretty different – a little darker, a little weirder, less folky – than my last few records, so I didn’t know what people would make of it.  And a lot of folks have told me that it’s taken them some getting used to.  I guess I’m glad that people are giving it a chance!  As far as press goes, I told my publicity dudes that they didn’t have to forward me anything bad, so yeah, I’ve felt great about the response!  Hardy har.  Seriously, though — yes.  I’ve been very pleased.  It was more than I expected.

What’s your favourite album ever and why?
If I could go ahead and choose the whole mid- to late- 60s Beatles catalogue, that would be great.  My bass player Joe just played me Ramsey Lewis’s White Album songs and the melodies and changes are so beautiful!  Very original call, I know. Go-tos from the last few years have been Mantler’s last two records, the most famous of the Ethiopiques collections, and Anais Mitchell’s Hadestown.  My friend Browning said he’s been listening to Htown at the gym these past couple weeks, on the rowing machine, and imagining that he was rowing across the River Styx. Mmm hmm!

Do you already have plans for your next album?
I’ve been talking to a couple folks about a collaboration.  We’ll see what materializes!

If you do a collaboration with Anais Mitchell we’ll be the happiest website ever… We’re sorry that Barclaycard aren’t sponsoring us to give the Schmercuries winner a million pounds (we assume that’s how much the Mercury prize is). If they were, and we did, what would you do with it?
Million schmillion.  I’ll take a hundred!  I’ll use it to buy a real coffee pot for this new place, and brunch at Cafe Aroma, across the street, which I hear is really nice.  Or maybe a new set of headphones.  That’s what I’d really like right now.   So, do you think you guys could do a hundred?

We’ll do a whip round!