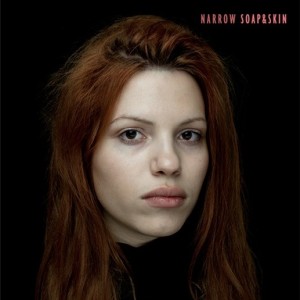 Anæmic-white and hidden in the black waves of her dress, Anja Plaschg condenses down to a voice. A voice uncomfortable and unsettling for all its deep and rounded beauty. A voice, and behind that voice a vortex for all the darkest emotions you pretend you don’t have, and all the darkest emotions you only dream of in nightmares. A vortex that seems to stretch and twist interminably, an endless spiralling chasm in which you find yourself entirely lost, unable to pin her down to an easy emotional typeset, and in which the only sound is the endless reverberation of Anja’s voice.

She is not fragile, for all her porcelain-doll physicality and all the taut emotionality of her work; not an eggshell quivering amongst blind footfalls, but rather the beast born from an eggshell smashed into a hundred pinprick flakes. That must be the best way to describe her – indestructible because she has seemingly already been destroyed, and has risen, both ethereal and immovable, a steel ghost with a string quartet. You watch her perform on stage and she is like a statue to an alien god on an alien planet – you can appreciate and marvel at the beauty, but you can’t decipher it. That’s not to say that she’s that misogynistic typecast of the “ice queen” either, but rather that she seems to have a feeling and an understanding that we just cannot comprehend.

This has always been plain in her lyrics, which are mature not merely “beyond her years”, but – you feel – beyond the emotional scope that most people will ever reach. ‘Deathmental’ sliced through the Scala crowd and if you didn’t feel uncomfortable as Anja, awash in flickering turquoise light, told you to “stop faking suffering, like a child”, then you clearly weren’t paying attention. Her music is not that of simple sadness or mindless destruction, nor is that of unbridled joy or innocent pleasure. Rather it makes you feel as if all your emotions are immature and inadequate.

Uncomfortable and unsettling. These are not criticisms – quite the opposite – but this was not a concert to move you to tears or to make you dance, because that’s not what her music (for the most part) does. And with songs so big and explosive, she never seemed lost or confused, even as, time after time (perhaps too many times), she veered into another thunder of hammering piano and electronic drums. And as she flailed her arms in time to the mania of ‘Marche Funèbre’ (easily the standout point of her set), she seemed to be totally unfazed about conducting the apocalypse – not as God, commanding and instigating each explosion, each destruction, but as some other Infinite Observer who, though not directing and controlling, knows the score intimately and revels in its crashing inevitability, secure in the knowledge that what will be, will be.

And then to close it all, she performed a beautiful cover of ‘Pale Blue Eyes’ that destroyed this image of her impregnable self that the entire preceding concert had created. It brought the experience back to a safer emotional palette, to something recognisable as sadness, and love, and loss that was so much easier to understand. No longer a spirit of untouchable feelings, she stepped back into a more recognisable fragility, becoming a conduit for you to pour yourself into. She made all your inadequate emotions acceptable to feel again, she allowed your tears to flow, and, as the speakers in the back corners of the room opened up with the droning chords, and the bowed electronics, and the rumbling kick drum, and her cracking voice, they did.

And with a swift pull of her arm the lights dropped to black, she left the stage and the music rose and filled every corner. And we were all able to pretend again that that was just a concert, and that songs were just music and lyrics.