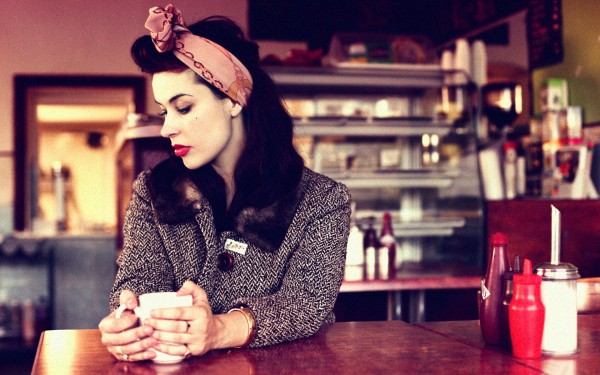 Louise and the Pins

Theres something in Louise Hull’s voice that the world has been missing, since, well…. since forever really: and it’s something I think we should  all be grateful to now have. We should get one thing straight beforehand though: alongside Louise, there exists one very marvellous band, one which definitely ranks a place in my “Top 5 Most Awesome Bands” list.  For starters, St.Pancras Church is a beautiful venue, and  any artist performing in there is bound to deliver something special, but there is an element of Louise’s music which made this even more so the case. The atmosphere prior to Louise and the Pins’ taking to the stage was one of strong realism: every single member of that audience had not merely come to ‘check it out’, or whatever you have it, but had come with a definite intention of watching Louise perform.

After a few moments of milling around, with people buying last-minute little plastic cups of red wine, Louise and the band took to the stage, accompanied by a small uproar from the audience. Without a word, she dived into her first song, and from memory it was at that precise moment when her music took a sort of drive of it’s own, picking up and carrying everyone as it went. I’ve seen direct comparisons made between her voice and that of Amy Winehouse’s, but from watching Louise sing I can’t say it’s as simple as that. Her voice sounds as though it belongs in the 50’s: it’s smokey, it’s jazzy and it’s range never failed to astonish me. Along with this were her band/’the Pins’; starting with her lovely backing singers. Styled similarly to Louise, their resonant vocals echoed through the majority of her songs, and it gave a wonderful sense of, and this isn’t real a word (apologies), retro-ness. On top of that, her band consists of a drummer, a bassist, another guitarist, and, my personal favourite, a dinner-jacket-wearing  pianist. 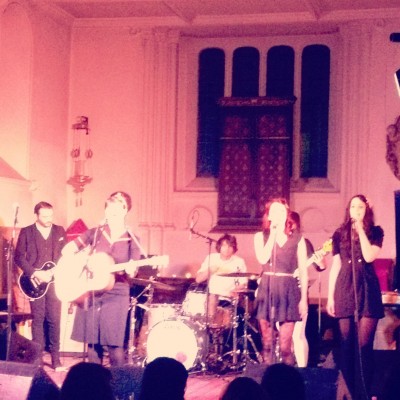 Throughout the gig, there were two particular highlights that stood out for me. Firstly,we were blessed that night with the presence of Jamie N Commons, an extremely talented musician in his own right. The prospect of a duet from these two is undeniably appealing in itself, but their rendition of Louise’s own song “Lately” only made this better. The pair somehow darkened this song, and left an especially strong sense of sorrow through a simplistic take on the melody. As well as this, Louise’s penultimate song was a rendition of her most recent single “Bell Jar”, a track from Louise which I particularly love, and now do so even more having heard her sing it live. Every single note bounded across what seemed like every single wall of that church, and being in a room with such a simple acoustic set up somehow increased the meaning behind her lyrics, stretching it to an emotionally raw state. After a well-deserved encore, Louise & the Pins departed the stage for good, and the audience were somewhat dumped back into reality.

Seeing Louise perform for a mere 45 minutes has genuinely left me craving for more. Our brief conversation afterwards also displayed a very humble and appreciative side of Lousie to me: with her endlessly thanking and taking time to talk to each person that came up and said hello, not to mention her exquisite natural beauty under true light. We talked about her gig, followed by the art of beehives (which I have to say is an art I’ve never seen anyone perfect quite as well as she has), and finally about hairdressers. She mentioned to me: “I might go peroxide blonde, I reckon it’d help me stand out a bit”. Perhaps this is true, but it has to be said that Louise Hull certainly doesn’t need peroxide blonde hair to stand out, her music does her justice enough, and I think it’s fair to say: you’re already standing out Louise.