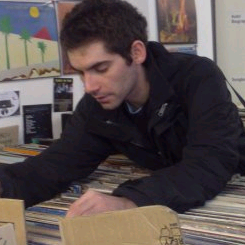 While some of us were busy watching Johnny Flynn’s baby singing his dad’s songs or pretending to be this guy, Ian was freezing in the line outside Piccadilly Records to try to pick up the WHOLE of the FFS RSD2013 Shopping List, and much more besides.

Like David Attenborough tracking a pygmy elephant through the Bornean jungle, we followed Ian’s progress this Record Store Day…

6pm, Friday 19th April: Heads to Manchester to sleep on a pal’s couch ready for the big day.

2am: Joins the queue outside Piccadilly Records. Waits nervously. The 2am arrival was only good enough to secure the 36th place in Picadilly’s queue.  “I was closer to the front in 2010, when I got here at 8,” he tweets forlornly.

2.14am: “The endless process of explaining to passing drunks what #RSD2013 is all about is well under way. With limited success.”

3.56am: “It was nice of harmonica man to come by and serenade us again. He was here much earlier than last year as well.”

7.59am: Our intrepid forager can be seen in this video jumping up and down at around the 3m10s mark.

8am: Ian gets into Picadilly Records. Seems pretty happy to be a. warm and b. in the presence of the records. 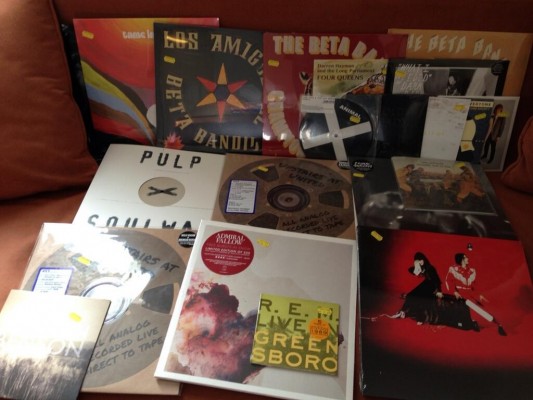 8.55am: Ian has acquired 100% of his shopping list. Hometime, right? WRONG! his day has only just begun…

9.20am: A nice chat with the guy in Vinyl Revival, who used to own Crocodile Records, the now sadly closed record shop inside Manchester Students Union.

9.40am: Then off to Beatin’ Rhythm to say ‘hullo’ and continue the search for this on 7″. Alas, still no joy on that front. 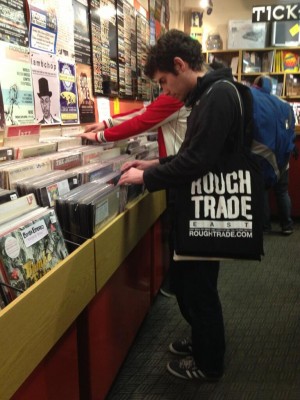 10:30am: Record Fair at the Brittania Hotel. Still no sign of Sinatra or his Sands.

12:20pm: Joins the back of the remaining queue outside Crash Records where he adds to the haul with David Bowie’s ‘Drive-In Saturday’ picture disc.