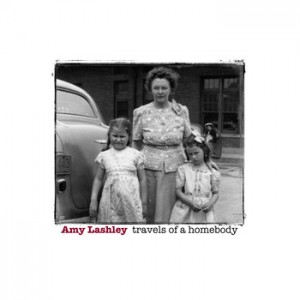 Fans of a more traditional Americana sound should find plenty to like about Amy Lashley’s latest record Travels of a Homebody. Combining blues, country, folk and even a little jazz, Lashley playfully switches between the styles in a manner akin to Erin McKeown. Her partner Otis Gibbs, who takes the controls on this LP, may be known as a bluesman, but Lashley feels no such constraints. From the sweet folk of opener ‘Kissing Indiana Goodbye’ to the down-home country of ‘Who Am I Kidding?’ and the bluesier sound of ‘Livin’ on Beans and Cornbread’, she travels through the history of American music. That said, there’s little new about what Lashley does, just an assuredness and a sweet voice to carry the songs.

But while her musicality is at the fore on several tracks, Lashley clearly fancies herself as a lyricist too. Reflecting the fact she has settled down now in life, Lashley uses this LP to sing some more personal songs, not least the opener, a farewell to her home state now that she has moved to Nashville. ‘Who Am I Kidding’ reflects on her childhood taste for wearing boys clothes, causing, it would seem, a great deal of curiousity from her grandmother, while Lashley rails against the nostalgia for lost childhoods on ‘Ode To Middle Age’ on which she declares ‘I’d rather be forty than five’. There’s also room for an old-fashioned protest song, ‘Emmett Till’, about the teenage African-American boy murdered in Mississippi in 1955. It was a subject tackled by none other than Bob Dylan back in the day, and Lashley admitted that, once she discovered that, she took some persuading to include it here. That seems to be part of the understated charm that defines this record.