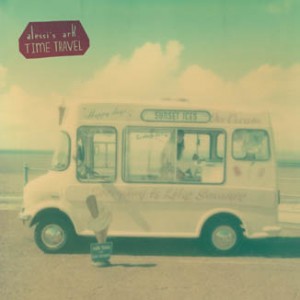 ‘Oh by now I must’ve grown’, sings Alessi Laurent-Marke on her second album Time Travel. And she has. Her writing, her melodies, the playing, the whole ambience of this album is stronger, more mature and simply wonderful. She’s yet to turn 21 but, like her contemporaries and friends – you know, that lot, the Mumfords and the Marlings – she’s proving that beauty comes before age.

The beauty here is some of the gorgeous songs on this album, showing off her unique tremolo-ing vocals, vibrating like an owl under water, but also the musicianship. The playing is rich like a summery woodland in bloom and, while not some of the most complex you’ll ever hear, props the Ark up perfectly. That’s not to say this latest offering will be everyone’s cup of folk. Alessi’s voice is an acquired taste and one that could grate rather than be great so some. But this album is more than just the voice. The occasional use of trumpet, flute and harp pushes Alessi straight out of that ‘any other young folky’ box. It’s verging on Joanna Newsom beautiful, and not only because of the harp similarity.

There are definitely more than a few songs on this album that will shoot to the top of the favourites list. The Robot, heard on last year’s Soul Proprietor album, is quaint, vintage, cute and lovely, while Maybe I Know, with its poppy country feel is Dolly Parton sweetness with an English Rose attitude.

But these more obvious tracks are not the ones that make this album so listenable. Instead, it’s the more soulful, more heart-achingly delicate. It’s the kind of song writing that sets Laura Marling apart from Lily Allen.

Wire, produced like Alessi is singing in a warm wooden box, is a simple pop song, but so lovely. Stalemate too, plodding along like an elderly beach donkey, its double bass protruding through some lovely brushed percussion and a basic strummed guitar, is one of those songs that just lingers on your skin way after the album’s finished.

The Fever, an instrumental break with the before-mentioned harp and a well-loved piano, is one of my favourite bits of the album, just for the way it pulls together to rest of the album and, once again, pushes it a step further from the commercial folk pop.

And Blanket, at just over a minute long, wraps up the listener and soothes them with a swirling melody and ghostly vocals before the album jumps feet first back into something a bit more mainstream. It’s these slightly odd and personal additions to albums that prick up ears instead of bashing out tune after tune of radio-playable songs. It’s nice to see the art of the album isn’t dead.