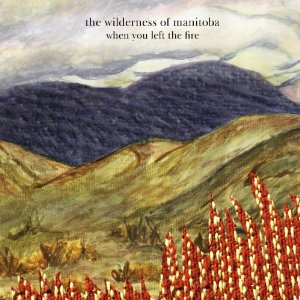 A strange thing this – an album which is simultaneously enchanting and a little bit dull. You know those records you get completely lost in, then you realise it’s finished and you don’t know where the time went? Well, this one you get completely lost in, then realise you’ve only listened to about two and a half tracks and there’s another 45 minutes to go.

Toronto five-piece The Wilderness of Manitoba really want to lift you up invite you to float away with them –and you’ll be prepared to go with them, just maybe not as far as they’d like. As the name suggests, the music has a campfire sensibility, even if it is a little deeper and richer than that tag sounds. No doubt, though, what When You Left The Fire is built around – guitar and harmonies, with gentle percussion in the background barely piercing your consciousness. It’s a little bit country, a little bit hippie and a big bit wistful.

There’s a certain epic sweep to the wistfulness which beguiles for a time, but after a while it becomes stifling. ‘Hardship Acres’ provides a much-needed, jauntier change of tone, even if it is jauntiness touched with wistfulness, while ‘Summer Fires’ is a rousing, wistful country anthem. With a name like The Wilderness Of Manitoba, you can’t say you weren’t warned.

When they do get it very right, like on White Water, the music has just the sort of dreamy effect it ought to. In truth, though, When You Left The Fire struggles to replicate the heights of opener Orono Park – and never quite earns the right to be as self-indulgent as it is.