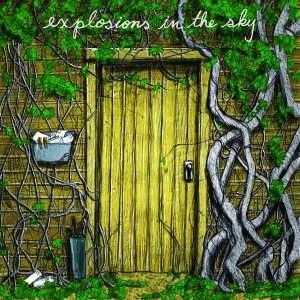 Take Care, Take Care, Take Care is standard Explosions in the Sky fare: thoughtful, aurally and melodically indulgent, it’s an exuberant pleasure. Opening track ‘Last Known Surroundings’, typically loud, sweeps through epic guitar arrangements and definitely signals that the band aren’t about to depart from their familiar encouragement that we should all be air-drumming along in our rooms; third, fifth and sixth tracks ‘Trembling Hands’, ‘Postcard from 1952’ and ‘Let me Back In’ have much the same feel.

Similarities don’t end there: like every Explosions In The Sky album before it, a majority of its six tracks move without fail through much extended “loud-quiet-loud” sequences. Very often, you know what’s coming. ‘Human Qualities’ exploits that feeling the best, beginning with a melancholy minor mode and closing, the music having gradually willed itself towards it, with the loudest section on the album.

That “loud-quiet-loud” sequence dictates a lot of the album’s dynamic. ‘Be Comfortable, Creature’, maybe the strongest of the six songs, relies on its poignant and child-like sweetness, and its naivety is heightened by the tracks that precede it; the disconcerting ‘Let Me Back In’ benefits from the slow progression through ‘Be Comfortable, Creature’ and ‘Postcard from 1952’, and is a great close for the album.

Of course, that dynamic is one that Explosions In The Sky fans are used to: it’s the album’s biggest strength and obvious weakness. That said, Take Care, Take Care, Take Care is a very strong record indeed – and if you’re a big fan of the band you won’t be disappointed. If you’re only mildly interested, though, then you’re better off sticking with what you had; pick one track, maybe ‘Last Known Surroundings’ or ‘Be Comfortable Creature’, and be done with it. Equally, if you’re new to Explosions In The Sky, then this album is a must buy: they’re always worth listening to, and this is as good a place to start as any.