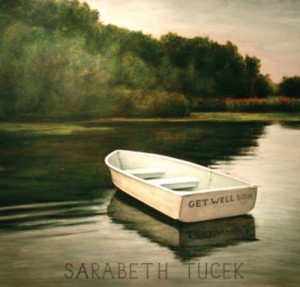 Before we start I should point out that I don’t think of myself as the kind of person who is prone to hyperbole. In fact I’m probably the least likely person in the history of…like…ever to exaggerate. That being said, there are no two ways about it: there is something extremely special about this record.

Before you even hit play, it’s clear her credentials are in order. She has the much-coveted stamp of approval from Bob Dylan, whom she supported in 2007, she was selected to provide backing vocals to the Smog album Supper before releasing a note of her own and she has a rare confidence in delivery that belies her past as an actress.

All of which is terribly interesting, but pretty much meaningless as soon as you begin to explore the songs themselves.

Tucek’s is a perfect folk voice, rich and clear, expressive and ethereal in equal measure. At times she comes over all Alela Diane, and at others she channels the winsome charm which somehow failed to make Dublin’s Gemma Hayes a star.

Like Diane or Laura Marling, Tucek finds plenty of inspiration in traditional folk music, though she rarely lets a track slip by without something a little surprising kick in – like the military drumming of At the Bar or the fuzz-guitar finale of Rising.

The immersive double-tracked vocals of A View provide the sweetest moment, while The Fireman packs the weightiest emotional punch, but it is the remarkable Wooden that has won most people’s hearts so far.

As a taster for the album it is actually a neat line in misdirection as there is nothing else here cut from the same musical cloth, but as a standalone song it is a real killer.

Starting out as an elegiac strum, complete with Nebraska-style squawls, it reaches the two-minute mark before Tuck ditches her Beth Orton persona in favour of a searing electric solo that Neil Young would happily call his own. It’s an adrenalized, wonderful moment and although it might be nice to hear a little more of the same as the album progresses, what takes its place is enchanting enough to bear the burden.