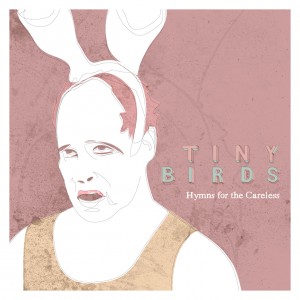 I reviewed Tiny Birds for the New Bands Panel back in June, and liked what I heard – ‘Ariadne’ remains perhaps the best song I’ve been introduced to via that route – so when Hymns For the Careless cropped up I was immediately interested.

The album gets off to a familiar start with the jolly and lyrically strong ‘Seaside Town (In the Winter)’, with ‘Ariadne’ itself lurking in third – with the weak link from the original NBP selection, ‘Wisdom and Warmth’, the only one of the trio to have been jettisoned in the interim.

The upbeat feel prevails for many of the eight songs which constitute a brief offering – even when claiming on the title track (well, a singular Hymn if you’re being pedantic) that “You always wanted me to write you a song/I guess this wasn’t quite what you planned… I don’t know what makes me more sad/ This waste of our love, or the waste of the time we had”, singer Dave Hodge’s voice bounces over enjoyably plinky-plonky ukulele.

Too much of a good thing might begin to grate though – particularly when the element of tweeness is so central to it. It is welcome, therefore, to hear ‘Decisions’, ‘Love Isn’t Logic’ and the like offering variety as Matt Collins takes over on vocals. The former still possesses a healthy quota of “ba-ba-ba” backing vocals, but within a restrained slow song containing a brief raucous interlude, while the album-closing latter is equally haunting and brings us the simply sublime lyric “No wonder I pass on all of your shindigs/ In favour of submerging my feelings/ Into the music that speaks of the beauty/ That just isn’t inside me”.

At less than 25 minutes, the album certainly leaves you wanting more, and shows evidence of enough talent and versatility to suggest there will be a great deal more to come.

A final word to acknowledge an admirable approach to crisis management. “Something smells like burning”, Hodge notes on ‘Still’, before advising “Don’t fight this fire with fire/ Fight this fire with water and wash the ashes away”. Every day’s a school day.