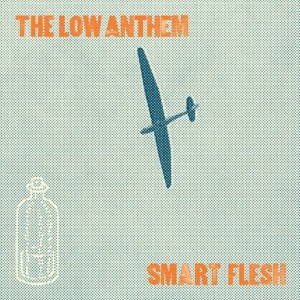 The Low Anthem are a band of two distinct worlds. Treading a line between traditional, perhaps even stereotypical, American country music and a more modern, indie-folk perspective, the band have manifested this schism in different forms over the years. 2008’s Oh My God, Charlie Darwin became something of a schizophrenic affair, careering wildly from the spaced-out balladry of the beautiful breakout single Charlie Darwin to more stomping, upbeat fare and, while this revealed the band’s many talents, it never quite seemed like two parts of a whole. This, their fourth album, goes some way to rectifying that particular problem, with most of both feet planted firmly in the Charlie Darwin camp of song style, but with a view to displaying their whole set of musical qualities.

Smart Flesh is an album haunted by slow-burning country instrumentation, the delicate tones of Ben Knox Miller and melancholy. The pace is rarely upped beyond first gear, and for good reason – The Low Anthem know how to command your emotions, and most often it comes in slow motion. First single and George Carter cover Ghost Woman Blues is a perfect example – the blues of the title only remains in lyric form, with nothing more than the echoing tones of a piano and the merest hint of percussion making up most of the song, giving Miller’s vocals the space to soar above it all as he laments, “I ain’t no lamp, but my wick is burning low”. It’s this space afforded for emotion that becomes most apparent throughout, with even the most upbeat songs (the trumpet ‘n’ drum Neutral Milk Hotel fanfare of Boeing 737 a noticeable exception to the album’s general tone) invested with more strident negative feeling than you might expect.

But of course, with a band of multi-instrumentalists, the vocals were never going to be given total precedence – and it is in this area that the group rectify their internal split between the traditional and the more obviously modern. While the accepted mediums of modern folk are all present here, harmonies, organs and banjos abound, there are some more singular additions to the sound. Jocie Adams brings her skills as a clarinettist to bear (most notably on the atmospheric instrumental, Wire) while there are flashes of singing saw, lap steel and what sounds like a giant rubber band being plucked (in the title track) in amongst the more familiar sounds.

Put up against the preceding record, Smart Flesh is an infinitely more measured experience, the sound of a band comfortable with who they are, and letting the songs speak for themselves. The criticism then is that this comfortable feeling never allows for the sheer magic of some of the best tracks on the last album. In letting loose, they showed the best of each end of their particular musical spectrum, whereas Smart Flesh never allows for a standout. It’s a frustrating outcome from a band so obviously talented. So, having fixed one problem, perhaps it’s not until the next album that we’ll see the best of both worlds.