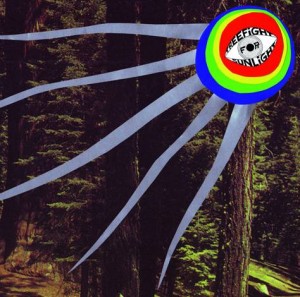 Having been a keen follower of the Scandinavian music scene for a few years now, I sincerely hoped that Treefight For Sunlight’s self titled debut could hold it’s own against some of the recent output from the region.

Thankfully this Danish quartet, signed to the excellent Bella Union label, has far exceeded expectation with a breathtaking record of genuine charm and beauty. They say that good things come in small packages and, sickening clichés aside, at a mere thirty five minutes long that is certainly the case here. Equipped with a disposition that teeters between happy and euphoric, a mood enhancing quality is one of the prevailing effects and very welcome it is too.

Another highlight is the intricate three-part vocal harmonies which are often backed by flawless choir arrangements. In fact, the band claim to have spent six months working on the backing vocals alone and it’s clear that a lot of effort has gone into getting all of the fine details right.

There will be inevitable comparisons to MGMT, but it’s fair to say that TFS draw their influences from a broader canvas; there are elements of the likes of The Beach Boys and The Turtles for example.

It’s hard to pick out favorites but if pressed I would go for the anthemic The Universe Is A Woman, the single What Became of You And I? and Facing The Sun which is like the adult equivalent of the Sesame Street theme tune but better because when it’s over you’re left with a warm glow rather than the tedium of primary education.

This is a hugely promising debut which sits proudly on top of the ‘highly recommended’ pile but be warned, it can cause an infectious smile.