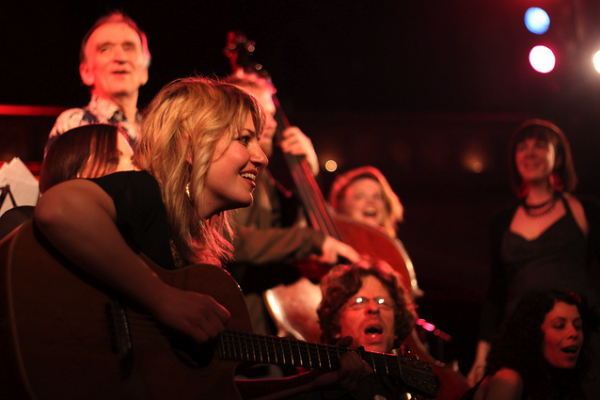 First things first: Hadestown is wonderful. Despite being released just a year ago, it’s safely in my all time favourite albums list and there it shall stay. It’s an incredible record, a sad and affecting story told through smartly-observed characters with beautiful melodies and orchestration.

It’s Anais Mitchell retelling of the story of Orpheus and Eurydice and the dark depression-era world they inhabit. And in making the album she assembled Ben Knox Miller from the Low Anthem, Justin Vernon from Bon Iver, Ani DiFranco, Greg Brown and the Haden Triplets.

For this show, Anais had drafted in some UK folk stars to fill the album cast’s undeniably sizeable shoes. Jim Moray as Orpheus was passionate and competent, but lacked the subtlety of Vernon. His heart-on-sleeve emoting detracting from the already-obvious pathos, and causing the gentleman sitting behind me to remark, “I’m kind of looking forward to Orpheus dying”.

But Thea Gilmore replacing Ani DiFranco as Persephone was fantastic, a fearsome lady of the underground, all attitude and sass. The trio of Fates played by Wallis Bird, Nuala Kenedy and Sharon Lewis were similarly excellent with crisp harmonies and punchy delivery. Their songs ‘Nothing Changes’ and ‘When the Chips are Down’ were two of the evening’s best. And it was when Anais’s character Persephone sang with the other women on ‘Flowers’ and ‘I Raise My Cup To Him’ that the magic of the record was recreated.

Anais and the Hadestown Orchestra are, unsurprisingly, the show’s stars. Her voice and guitar twang in unison as she sings Eurydice’s lament to Orpheus. Her energy and presence fill even the Union Chapel’s cavernous heights. And when she leads the cast – and later the audience – on the album’s pivotal ensemble piece ‘Way Down Hadestown’, her enthusiasm for the show is infectious.

Greg Brown sings the part of Hades on the record, his dark growl making him sound like he’d walked straight out of the pages Sin City. In this stage adaptation, Hades part was taken by trad folk legend Martin Carthy. His voice is tired and warbley and his accent strangely West Country. Appearing in a Hawaiian shirt, stumbling over words and singing out of time he was about as scary as being attacked with a tissue. Jim Causley’s Hermes was similarly underrehearsed.

The merciless grandeur of the Union Chapel doesn’t allow for shoddy performances. In a dingy club, with a buzzing, sweaty atmosphere, this ramshakle Hadestown could have been quite an experience. But reverently hushed in the pews of this awesome church, the crowd need something awe-inspiring to match it, and an underrehearsed Hadestown fell slightly short of the mark.