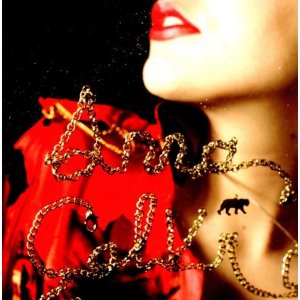 The opening track of Anna Calvi’s eponymous debut, ‘Rider to the Sea’, is gloriously filmic, a Western in two-and-a-half minutes, complete with rattlesnakes, rumbling drums and gongs. Calvi’s vocals enter only as a crescendo at the end; it’s like meeting a particularly melodramatic mermaid.

This swooning, sensual album has endured much comparison with PJ Harvey, which is an irritating challenge to die-hard Harvey fans like me, so let’s address the charge swiftly and move on. Yes, Calvi echoes PJ Harvey’s To Bring You My Love era: all deserts, devils, grandoise passion and strong, deep vocals. But this is more of a sun-drenched landscape, less messy; even in Harvey’s cheeriest moments there is a dark chord.

In fact, Anna Calvi seems to be at her best when she’s not trying to be dark, like a flamenco dancer donning a goth costume; I grew impatient with the husky come-ons of second track ‘No More Words’, but was practically euphoric at third track ‘Desire‘, which is the most fun thing I’ve heard in a long time, with its tub-thumping beat and joyous, sweeping chorus.

‘Suzanne and I’ is like a Bond film soundtrack; it could have been written at any time in the past four decades. Indeed, Calvi is so slick that it’s hard to tell if all her songs really come from the heart; there’s something of the cabaret act about ‘First We Kiss’: theatrical, sexy, possibly insincere.

There’s so much to love that any misgivings are quickly drowned out, however; her major theme is seduction, and she does it brilliantly. ‘Blackout’ is beautiful, gleefully sweeping everything off its feet. Some may find it all a bit overblown, but this album sounds like someone having a hell of a lot of fun, and potentially creating a classic in the process. Final track ‘Love Won’t Be Leaving’ sounds like Judy Garland crossed with Pulp Fiction. She shoots, she scores.

Out now on Domino: Anna Calvi