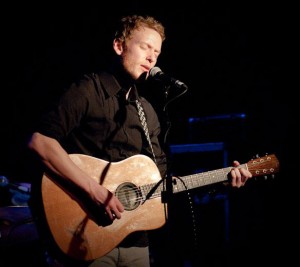 The Black Box is a dedicated arts venue in the heart of Belfast’s Cathedral Quarter and tonight it’s packed for one the most keenly anticipated shows of the Out to Lunch Festival. Even though it’s a school night the beers are flowing as people take their seats and Brighton-based songwriter David Ford takes the stage.

Kicking off with the vocals and percussion of ‘Nothing At All’ it’s not long before Ford is in full flow utilising loop stations, piano and guitar. The tunes tonight are mostly from the latest two albums and the fuller sound of Let The Hard Times Roll echoes beautifully around the venue. Ford’s track ‘Stephen’ is about the paramilitary murder of police officer Stephen Carroll and always takes on a special poignancy in Northern Ireland, before he takes us across the Atlantic to deliver a feverishly angry ‘State of the Union’ at much the same time as Obama’s doing likewise. The applause is as rousing as the songs have been and Ford soon returns to stage to play backup guitar for the main act.

The star of the show this evening is undoubtedly Mr Teddy Thompson, son of Fairport Convention’s Richard Thompson and English folk legend of the 70’s and 80’s Linda Thompson. Teddy’s live show is a slick affair. Years of touring with his parents and other indie and folk artists such as the Wainwright clan have given him a great stage presence and the patter with the crowd is as enjoyable as the music.

The bulk of tonight’s set comes from his latest record A Piece Of What You Need with a smattering of tunes from the upcoming Bella. If tonight’s performance of the new tunes is anything to go by the new record will be one to look forward to. While the band takes a breather, Teddy wields an acoustic guitar and slows things down with more country-style tunes from older albums before resuming the pseudo-Jackson Brown role and wrapping up the night with ‘In My Arms’ and a bizarrely twee version of Abba’s ‘Super Trouper’.

That’s put a smile on the faces of punters as they head out into the cold clutching their CDs and holding onto memories of a great night of folk pop from two of the festivals greatest talents.