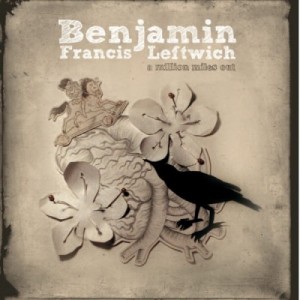 A Million Miles Out is the first EP from Communion compilation alumnus Benjamin Francis Leftwich.

The opening line of first track ‘Atlas Hands’ is ‘take me to the docks there is a ship without a name there, and it is sailing to middle of the sea’ and the EP goes on a kind of journey from this starting point.

The entire record is filled with imagery of the water and the hope that travel, or even the possibility of it, brings. ‘Atlas Hands’ is a beautiful, uplifting song- particularly the line ‘I’ve got a plan, I’ve got an Atlas in my hands’ which rings out from the whole record.

The instrumental music throughout A Million Miles Out also often takes inspiration from the sea. The second track ‘More than Letters’ opens with a
continuous beat, like a wave caressing wood or a sail being slapped by the wind, which pulses throughout the song. It is then joined by the guitar line
which sounds like rippling water- and over this base Leftwich begins by singing ‘all the water, all the water in the world’. He has a gentle, ethereal
voice which, like his music, is thoughtful and serene.

The EP’s third song ‘Maps’ is where the Leftwich experiments with what cannot be changed in life- even by changing your surroundings- the problem of loving someone who doesn’t love you back. It’s a song about doing everything you can to impress someone, doing everything they ask and waiting to be seen by them, perhaps in vain. There is no bitterness in the song though- it only highlights that you can lose yourself in pursuing a person the way
you can get lost on a journey.

The final song on the EP is ‘Hole in my Hand’, a song about coming home. A simple, muffled musical arrangement allows the soft, almost whispering
quality of Leftwich’s voice to shine and be the full focus of attention initially. The song builds to a crescendo when the narrator decides he wants to
come home and the EP finishes on the idea of drawing a line in the sand to get to your home, to your place and your person. The idea of being back on
sand after the watery imagery of the previous songs feels very satisfying and this beautifully rounded EP leaves you feeling content, uplifted and optimistic.