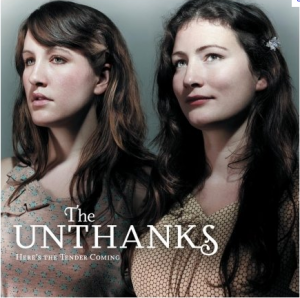 Though their previous album, The Bairns, was Mercury-nominated in 2008, I hadn’t heard The Unthanks until I stumbled across Here’s The Tender Coming in a second-hand record shop, spied the pensive-looking girls on the cover, recognised My People and took it home.

Their clear-as-a-bell northern voices are something like Blue Roses, and their unadorned sister-sister harmonies resemble First Aid Kit, but this is very pure traditional folk that refutes such comparisons.

Rachel and Becky Unthank largely re-animate and reinvent voices of the past; the only fully original track on the album is ‘Lucky Gilchrist’, written by producer and pianist Adrian McNally in honour of a friend. So they aim for resurrection rather than self-expression, and channel their ghosts beautifully, often wistfully; the album swarms with lost sailors and dead soldiers.

This is leavened by lighter, jauntier moments in, for example, ‘Where’ve yer bin, Dick?’ but I found the honky-tonk bounce of hidden track ‘Betsey Bell’ a bit much; The Unthanks don’t really need to jolly things up. The title track is a stand-out, able to circle in your head for hours. Like several others in the album, it evokes a female history of watching and waiting (no surprise that The Unthanks have been featured on Woman’s Hour).

The ‘Tender’ is a ship coming to press-gang men to war, the singer beseeching “if they take thee, Geordie, who’s to win our bread? Me and little Jackie better off be dead…” ‘The Flowers of the Town’, from the First World War, similarly laments departed lovers: “lost in Flanders by medalled commanders, the flowers of the town, they are all turned away”.

Other high points are ‘Because He Was A Bonny Lad’, ‘The Testimony of Patience Kershaw’ and ‘Annachie Gordon’, a Lady-of-Shallot-like tale of doomed love. Though the sheer earnestness could weigh a bit heavy for some, there’s no denying the eerie strength and beauty of these songs.

1 comment for “Album: The Unthanks — Here’s The Tender Coming”