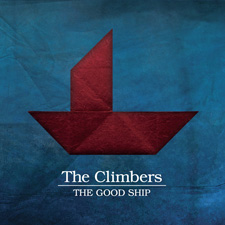 The Climbers are made up of Nick Hemming and Christian Hardy of the Leisure Society, Tim West and a supporting cast of floating members, most of whom are members of other groups on the burgeoning Wilkommen Records. The existence of the Climbers as a ‘studio band’ made up of various members of other groups goes some way to explaining why this album has been 6 years in the making.

With those such as the seemingly indefatigable King Creosote (if there was an award for “The Most Prolific Man in Folk” he would be a shoo-in…) releasing an album every other week, you’d have to say that the Climbers have been rather laboured in producing this long-awaited record. Fortunately the wait has paid off, with the sheer number of contributors to this record giving it a diverse and unconventional sound that allows it to stand above most of their contemporaries.

Album closer “If there’s anyone” and “In a circle” demonstrate a stripped back, yearning sound reminiscent of Grizzly Bear at their most accessible. While both tracks are pleasant enough, it’s on the more unusual, experimental tracks that this album truly shines. The driving discordance of “Bookshop Folk” is a layered and intense standout moment, overshadowing the more by-the-book folk pop sensibilities on which “The Good Ship” floats for much of its duration.

While the trend in recent times towards an “everything-but-the-kitchen-sink” relationship to instrumentation often results in songs that sound somewhat jarring and claustrophobic, tracks like “The Fellowship” and “The Good Ship” manage to utilise a multitude of different instruments without ever sounding cluttered, instead exuding a sort of collective sea-shanty vibe that sounds both spontaneous yet skillful.

While other Wilkommen bands occasionally veer onto the irritating side of twee, this record doesn’t try too hard to be quaint or to ingratiate itself with the listener, and is all the better for it. Here’s hoping it doesn’t take them another 6 years to make their next record.

← Album: Mountain Man – Made the Harbor
Album: The Drums – The Drums →