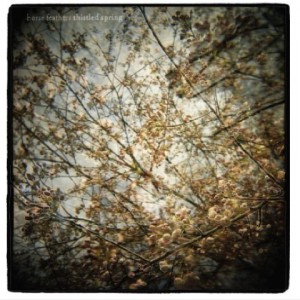 The new album from Portland-based Horse Feathers doesn’t deviate much from the beautiful, tightly constructed indie folk of their previous releases. Strings, guitars and banjo are layered below Justin Ringle’s soft vocals, with lyrics that create the blooming atmosphere of spring.

Opening with a rocky but understated piano line, ‘Thistled Spring’ is a lament to a lost love. The banjo build-ups on ‘Starving Robins’ and ‘Belly of June’ encapsulate Horse Feathers’ live sound, a joyful but quiet re-imagining of bluegrass traditions.

Though a great ambience is created, the energy of these songs is lost amongst the production. Ringle’s singing is fairly distinct, but the album loses something of the brilliance of their live harmonies by over-emphasising the violins and cello. A mournful saw and simple guitar line open ‘Cascades,’ growing slowly as other instruments and voices join in.

The highlights come in a row on the second half of the album. On ‘The Drought,’ the intertwined banjo and mandolin of the verse and swinging violins of the chorus construct a soundtrack to the filmic quality of the lyrics: “Amidst the burning breeze / from the ground up through the trees / I hear the birds complain about the lack of the rain.”

A fantastically dark ‘Veronica Blues’ recalls the rolling rhythm and chorus singing of British sea shanties, as well as their earlier work such as ‘Working Poor.’ This leads well into ‘As A Ghost,’ which has a particularly traditional sound and interesting tremolo piano, though the vocals need more impact in these songs. More use of drums would also be good, as it would develop the better rhythms and differentiate some of the songs.

As a whole Thistled Spring is well put together, but the songs themselves need a little more of the definition and energy of their debut record and live performances.