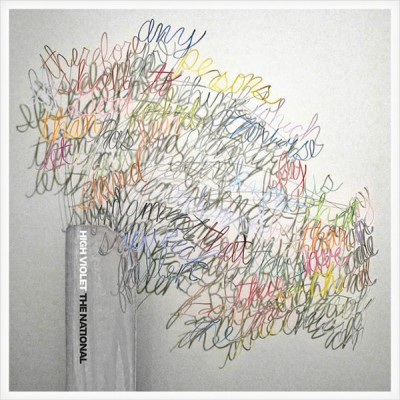 There’s something frighteningly well thought out about High Violet – over its 47 minute duration every song seems perfectly well placed to create the mood that the band want you to feel. Whilst it’s certainly not a concept album there seems to be a dramatic structure behind it – the literary theorist Gustav Freytag specified the five parts of storytelling that make up the dramatic arc, the way a story changes and keeps the attention of the reader or viewer – The National seem to have extended that to album-making and sonic aesthetics.

First comes the “exposition”, the part of the story where expectations are set up to be challenged and opener ‘Terrible Love’ does just that, beginning with slow-burning angst that builds to reach a phenomenal climax, all anthemic vocals and cymbal crashes before breaking abruptly into expectant silence. Next comes “rising action”, where new expectations are formed, served perfectly by ‘Afraid of Everyone’, a Sufjan Stevens-aided nervous breakdown of a song – tremulous guitar shivers cut in over distant, echoing vocals making the listener as tense as Matt Berninger as he sings ‘With my kid on my shoulders I try/Not to hurt anybody I like’. At the centre of the work comes the “climax”, a moment where every expectation is released, a role which album centrepiece and first single ‘Bloodbuzz Ohio’ performs admirably. Rollicking drumbeats and a sheer density of instrument noise make this a perfect song for the band to take the brooding nervousness of what’s come before and let loose. Post-climax there’s “falling action”, where the effects of the last event are seen and the action winds down. ‘Lemonworld’s slower pace and measured instrumental style sounds like a result of the sheer exertion of the last track, lending a quieter feel to the second half. Finally, there comes the “denouement”, where all issues are wrapped up and the condition of the plot is returned to how it was in the exposition. ‘Vanderlyle Crybaby Geeks’ takes up this mantle – mirroring the slow-burning anthem that began the album.

As the final track fades away, it really feels as though you’ve been taken on a journey that was authored just for you and it becomes clear that The National have not only exerted a musical influence over you, but a poetic, literary one. Like any story, there are moments that don’t work quite as well – ‘Little Faith’ lacks the emotional impact of the songs around it – but as a whole work it’s a triumph. The National haven’t just made an excellent album, they’ve made something truly dramatic – in both senses of the word.