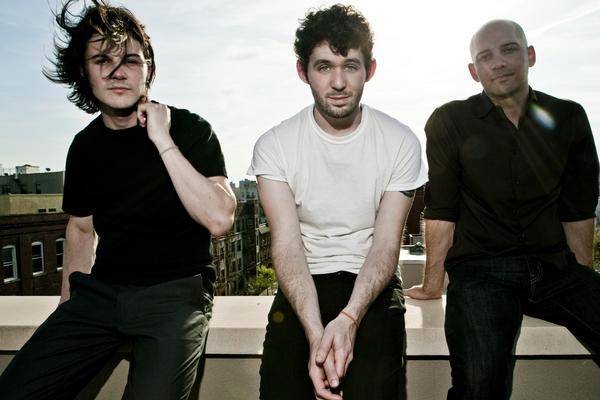 Kings Cross is an area lacking identity over and above being a major travel hub. The immediate vicinity is a tableau of inner city post-industrial decline and recent attempts at regeneration which have, in the main, failed. The venue for the latest performance by The Antlers, Scala, is an embodiment of its surroundings, oppressive, dark and in need of some tender loving care. There are, however, times when this can work to its advantage.

Some people talk about death as being only the beginning, but with their album Hospice The Antlers have produced a work rooted firmly in the finality of that moment, and the despair that doomed love will do anything to cling on to hope. Optimism was checked at the cloakroom and realistic fatalism drawn like a shroud over the audience, descending as the triumvirate took the stage to a rather pathetic blast of dry ice. The oppressive inevitability of decline that underlies both the album and stage performance became magnified by the decay and starkness of both the Kings Cross area and Scala itself.

The live show is somewhat confined by the nature of the ‘concept’ album The Antlers are touring to promote.  Hospice is a chronological narrative of argument, abortion, terminal illness, denial, resignation and death, a swirling dirge of heart-rending falsetto. Although as recorded material this enhances the work and the desire to listen to the album in its entirety, it also forces the live performance set list to run in line, leaving concerns that it could sound stale for devoted fans.

On stage the trio of Silberman, Cicci and Lerner take Hospice and drive the peaceful moments, crushing crescendos and walls of noise far further from the centre. One minute Silberman is singing tenderly, caressing the mic, and the next he’s hunched over his guitar, tearing all he can from its strings. The performance is enfolded by its predestined storyline but, let loose of the limits of studio recording, free to follow the emotional flow to its ultimate highs and lows.

Silberman rarely interacted with the crowd other than to announce ‘Two’ in which he explores the pit of frustration into which the entanglement of caring for a terminally ill and formerly abusive lover can plunge both parties.  The cross borne out of the nobility of such support is clear to hear… “Well no one’s gonna fix it for us, no one can… No ones gonna listen, no one understands…There’s no other witnesses just us two”. When his lover is gone, who will be there to value or appreciate his actions; and does that make them less important?

Listening to the album requires commitment to the potentially cathartic benefit of feeling someone else’s pain, seeing the live show is more akin to group therapy with the band in the role of therapists – antagonising an emotional response from the crowd as collective support. With more and more people claiming the material as their own, drawing interpretations and identifying perceived influences in the mythology behind Hospice will continue to increase. The ambition is however clear; the achievement has been in creating something that doesn’t simply represent a number of songs released together but rather a complete work of art with which the listener or audience can connect and emote.

4 comments for “Live: The Antlers @ The Scala, London”