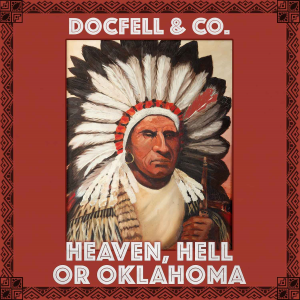 Last year, For Folk’s Sake was proud to premiere the earthen Americana of DocFell & Co.’s ‘Tough’. The tune was from off of their forthcoming compilation of bonafide dust bowl numbers, which we now know as the recently release Heaven, Hell or Oklahoma. Their third consecutive LP release, the Tahlequah quintet deal with the all-familiar earth as much as they do the spirit, influenced by death and the afterlife when writing and recording the songs that would appear on the album.

As much is evidenced with the haunting drone of the album’s opening track, ‘Peace Maker’, that feels as inviting a death knoll as any. It emanates with the palpable sweat of recent loss, brooding as much as it captivates. The band is quick to prove they’re more than just a one-trick alt-country pony, though, by catering more to the honky-tonk crowd with the significantly more lighthearted (comparatively) jangler, ‘End of the Line’. A reflective road song, the doctor and his company tap into a similar sweetness in its melody as the likes of Linda Ronstadt did with ‘Willin’  — welcoming Tucson mention and all.

Fans can attest to the quality of DocFell & Co.’s brand of atmospheric folk-rock, offering heavy dosages of elements from both sides of the combo-genre. A penchant for storytelling effectively meets rock’n’roll grit and sway, making for a helping of memorable red dirt that persists in the mind’s eye long past the album’s play time. Along the way, they provide spiritually moving stories on human persistence and what comes after, whether the story hones-in on Heaven, Hell, or all of what comes in between. For some, it’s Oklahoma.