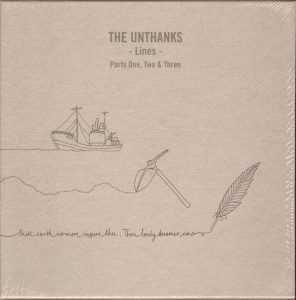 Lines, a trilogy of song cycles from the Unthanks inspired by poetry and focusing on three female perspectives over time – World War One poets, Emily Bronte and Hull fishing worker Lillian Bilocca – is a staggering meeting of music and words.

Lines 1: Lillian Bilocca focuses on the 1968 trawler disasters which saw 58 men lose their lives over the course of three separate incidents across a few weeks. With the words of two pieces written by actor Maxine Peake, this is a beautiful tribute to a woman who worked tirelessly to improve the safety conditions in the fishing industry. “For a man may whistle and a man may sing” is the mantra of ‘A Whistling Woman’, laying clear the struggle that Bilocca faced when told she was interfering in a man’s world. “A woman will bring the devil out of his den”. She stormed the trawler firms offices, the leader of the “headscarf revolutionaries”, demanding better training, medical equipment and weather forecasts, amongst other things. In return, she received death threats and was eventually blacklisted by the industry. The song cycle revokes the spirit and the character of Lillian fantastically. Bilocca is also the subject of a song on Reg Meuross’s latest album, ’12 Silk Handkerchiefs’.

Lines 2: World War One (first performed in 2014 as part of the opening year of the war’s centenary and entitled ‘A Time and a Place’) begins with a cacophony of keyboard and strings and the voice of Sam Lee before the Unthank sisters join in half way through. ‘Roland and Vera’ is a 7 minute adaptation of letters between Vera Brittain and her fiancé, the poet Roland Leighton who died from a gunshot wound on the war front. Two of the poems in this cycle were written by Sigfried Sassoon – Everyone Sang and Suicide in the Trenches – and the poignancy throughout is a testament to the arranging skills of Adrian McNally. War Film is a timeless ode against the horrors of war, written by Teresa Hooley – “All those men had Mothers – every one”.

Lines 3: Emily Bronte is the one that will get the most mainstream attention. Ten poems written by Bronte and set to music by McNally, composed on Bronte’s original piano (dating from around 1810). Written at night after the Bronte Parsonage in Haworth had spent its day as a working museum. All the pieces are stripped down to the sisters’ voices and a single piano and allow the words the room to breathe in their sparing arrangements. ‘Shall Earth No More Inspire Me’, ‘High Waving Heather’ and ‘The Night Is Darkening Around Me’ work particularly well. It ends on ‘I’m Happiest When Most Away’ which is just one of the most beautiful songs that the band have ever committed to tape.

No review could do this collection justice. It’s filled with love and celebration. I would urge anyone reading this to give this a listen and then go and spread the word. And then go and find out more about the women that it’s been inspired by.