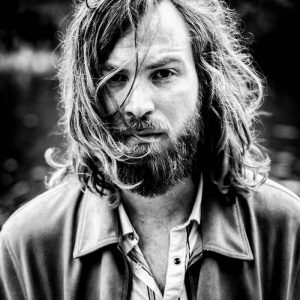 Music and misery have long gone hand in hand. In his novel High Fidelity, Nick Hornby pairs the two in a chicken/egg ‘which came first?’ scenario. Certainly, we are moulded by the music we listen to as we grow up. We learn heartbreak from pop music long before we experience it ourselves; the politics of our favourite bands guide our teenage belief systems. With that in mind, the debut album from Irish singer-songwriter Louis Brennan should perhaps come with a warning sticker: ‘Parental advisory: explicit existential despair.’

In a genre filled with dark themes, it’s been a while since anything has been released quite so unrelentingly miserable. All the more impressive is that despite this, the album manages to be so fun that it can be binged upon; listened to over and over, only becoming more enjoyable with each visit.

At the centre of Dead Capital lies Brennan’s acerbic wit, delivered with dripping irony in a voice that sounds like distant, rolling thunder. It helps no end that in songs like album centre-piece ‘Silence’ the lyrics are unreeled, piling accusation after accusation upon the listener: “Your open letter’s going viral, you got 30,000 likes and you think you’re a fucking environmentalist just because you ride a bike, but you show no solidarity when the transport union strikes; you say the age of collective bargaining was in 1985.”

Brennan tears into hypocrisy through apathy across the record, but always as a guilty party in his own right. In ‘I Walked Away from a Glittering Career’ he describes himself as a ‘suburban Victor Laszlo’, the fugitive Resistance leader from Casablanca. But calling out both his own failings and the immense privilege he has as a white man, being given multiple opportunities to thrive despite everything that has passed, it sounds a little more like he’s a particularly self-aware Boris Johnson.

It can feel almost glib to describe some of these lyrics as self-deprecating, when often they seem closer to pure self-loathing. But Brennan’s feat is in making this state so palatable. He gives form to our darkest thoughts about ourselves and, depending on exactly how well medicated you are right now, either gives you a chance to re-evaluate how bad things really are or, at the very least, reminds you that your experience is not unique and that you are far from alone in your self-doubts.

The album is brought to life by the variety of colours Brennan paints his songs in. Cohen-esque album opener ‘Airport Hotel’ is touched by light flourishes of piano and great washes of beauty from a string quartet that Brennan sourced via Craigslist whilst he recorded the record in Berlin. The desperately sad ‘Get on Top’ is a song about love in a relationship that has remained the same whilst the people inside it grew, and grew apart. On it, Brennan’s lyrics sit back for the final third, and an aching instrumental brings a weight of emotion down on the track. Elsewhere, the closer ‘Home Sweet Home’ pairs a devastating paean to small town Irish life with honky tonk piano and pub singalong vocals.

Perhaps the album highlight, ‘London’ is the coming together of everything that makes Dead Capital great: justified cynicism by the barrel-load, an un-erring sense of melody, and crying on public transport. It’s as close to a straight-forward pop song as Brennan is likely to get, and it’s catchy as hell. There haven’t been nearly as many classic pop songs about existential crises as you might have thought, but that won’t matter anymore once you’ve taken to dancing about the kitchen singing to yourself that “On the 277 I’m falling apart, there’s a rock at the bottom of what used to be my heart”. Brennan captures the false dream of London, whilst accidentally affirming it as a city that inspires great art.

When, on his final album, Leonard Cohen asked ‘You Want It Darker?’ it was meant as a tongue-in-cheek nod to his back catalogue, and not a challenge to a future generation of songwriters. But regardless, with Dead Capital Louis Brennan makes the first tentative steps towards being our next great channeller of the morose.

Dead Capital is an overwhelmingly beautiful album forged from hopelessness. Over the history of pop music, there have been a handful of great records in this mould. But they have always come from immense tragedy, loss of loved ones, or a growing acceptance of one’s own imminent mortality. Dead Capital draws on none of these. It despairs over the awfulness of our everyday lives, and it simultaneously acknowledges how big and how insignificant our problems are. It is an album that will ring true and bring surprising comfort to great swathes of people. Above all else, it is a record that harnesses what is often seen as the least productive of human emotions and yields something remarkable from it.