Henham Park hosted the 12th edition of Festival Republic’s Latitude Festival last weekend, and this writer was fortunate to be there for the 6th consecutive year. 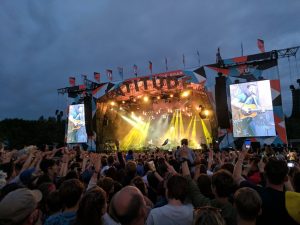 I don’t know quite what it is that keeps me coming back year upon year to Southwold to visit Latitude. It could be the setting; stages gloriously positioned between a lake, it could be the variety of arts and music which are diverse enough to appeal to those for whom politics is a passion, and those who want to experience the very best in current comedy. It might just be the fact that each year, the musical line-up sees current idols, future stars and returning heroes all sharing stages. There is simply something for everyone, and Latitude 2017 lived up to its lofty ideals once again.

Having arrived after work on the Friday night, the first set of the weekend we got to see was Imelda May’s in the Music and Film tent. My only previous experience of Imelda was the doo-wop inspired Inside Out, and so I was pleasantly surprised by the tour-de-force of gutsy soul and Americana that Imelda delivered over the course of an hour, with the majority of tracks taken from her latest LP, Live. Love. Flesh. Blood. Imelda certainly knows how to get a crowd going, and left the (admittedly hot, sweaty and cramped) tent wanting more.

From here, we decided on a sojourn to the Obelisk Arena to see what the fuss about The 1975 was about. Perhaps we picked the wrong part of the set to begin watching, but after witnessing two or three slow tracks in a row, punctuated by Matt Healey’s sloganeering, we decided enough was enough and got to the BBC Music tent just in time to witness Placebo finishing their set with a blinding cover of Kate Bush’s ‘Running Up that Hill’.  To finish the night, resident BBC 6 Music breakfast show host Shaun Keaveny delivered an hour of his ‘questionable’ comedy, which often erred on the wrong side of political correctness but was all the more amusing for it. A lovely chap, too, who was clearly adored by the Latitude audience. It’d be nice to make him a permanent fixture of Latitude.

As day broke on the Saturday, the programme was consulted during the wait for the (cold) showers. It was 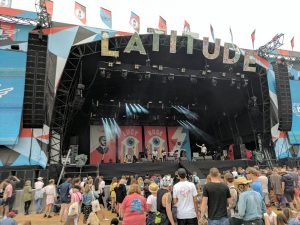 decided that the best start to the day would be seeing the always-on-tour and always writing Beans on Toast over at the Sunrise Arena. For those not well acquainted with the verse of Beans, if you imagine songs about fried chicken, MDMA, alcohol, politics and girls, all sung to only a slight variation in chords, you’d be nearly there. It is Beans’ effervescence which keeps the set from disintegrating into a mess, and whilst the time of day perhaps was slightly off, the crowd certainly enjoyed his set.

It was then a stroll to the newly branded Obelisk Arena to see Lucy Rose. The booking of Mumford & Sons as headliners had seen Latitude hand over the running of the day to the band, under their Gentlemen of the Road banner, and so all the branding across the site was changed to reflect this.  Whichever one of the band booked Lucy Rose however needs applauding, as she absolutely owned the cavernous stage for the best part of an hour. Admitting her nerves over playing ‘quiet, acoustic songs’ to a big crowd, Lucy needn’t had worried. Delving into her fantastic latest record, Somethings Changing, Lucy regaled the crowd with the story of how the album came about, following her trip in 2016 to play shows for fans in Latin America. Opening with ‘Floral Dresses’, Lucy then treated fans to tracks from the record, and even included a rare performance of ‘Shiver’. In the hazy afternoon sun, Lucy truly impressed.

After a brief break for lunch, it was time to see the excellent Declan McKenna in the BBC Music tent. Only 18 years old, it is clear that McKenna has the tunes to see him forge a successful career. Latest single ‘Humungous’ went down extremely well with the crowd.

It was then, following a trip to one of the branded beer stages, where this writer saw the set of the weekend, again at the BBC Music tent, only this time performed by The Lemon Twigs. Having purchased Do Hollywood based on the recommendation of Radio 6 Music, I tentatively knew what to expect from the D’Angello brothers; some quirky vocal theatrics, a bit of Queen posturing, and some sunshine-soaked 70’s rock songs. What I got was all of the aforementioned and more. The brothers, augmented by a bassist and keyboard player, alternated drumming, guitar and vocal duties, and left the crowd spellbound for the duration of their set. It was over-the-top, but never falling into pastiche, and left this writer energised for the future of good old fashioned rock’n’roll bands-even if they are theatrical in their multi-layered approach to song writing.

It would be hard for anyone to top that, yet Sylvan Esso delivered an equally energetic set in the woods to a crowd eager to dance.  Leon Bridges did the same over at the main stage, delivering an hour of soul tunes to an audience growing in its anticipation of the day’s headliners, Mumford & Sons.  Having hand-picked the bands playing on the Saturday, the band, accompanied throughout the set by Baaba Maal, the Very Best, Maggie Rodgers and the other artists whom had graced the main stage across the day, showcased just how to deliver a festival set. Encompassing mass singalongs (‘Little Lion Man’, ‘I Will Wait’, ‘Ditmass’)  the building crescendo of ‘Dust Bowl Dance’, and the finale of ‘With a little help From my Friends’, their 90 minutes flew by. It was a bold move by the festival to allow one band such autonomy over a day at the festival, but based on the amount of tickets sold, and the thoughts and feelings of the audience after the set, it was an idea which worked.

Awaking with the first rays of sunlight on Sunday, it was clear that some people were just returning to their tents from the night before. Having applauded their dedication, and after mooching around the village, it was time to take a seat in the comedy tent, and the morning soon became afternoon with the comedy of Marcel Lucont, Andy Parsons, Lolly Adefope and  Aisling Bea ringing in the ears.  Sundays at Latitude are traditionally quite laid back, and so it proved musically. Ward Thomas played their version of inoffensive but forgettable pop-country tunes over to an excited Obelisk Arena, and then Jesca Hoop captivated the crowd over at the Sunrise Arena, treating the fans to tracks from her excellent record Memories are Now. Girl Ray followed, and it is easy to see why Marc Riley over at 6music has championed this band recently. Their caustic songs of love and the trials of early adulthood are met with warm acclaim by the Latitude crowd. Their record, the ingeniously titled Earl Grey is out in August.

The band of the day however were the glorious Public Service Broadcasting, who brought the sounds of the Welsh coal mining town of Ebbw Valley to the Latitude stage. Combining my two passions, History and Music, together, PSB are a fantastic proposition and delved into tracks from their three records, all accompanied with visuals from the relevant time period. Knowing their shortfalls, PSB have cannily employed a three piece brass band to augment tracks such as ‘Go’ and ‘Gregarin’ from The Race to Space. On the latter, the 3 piece break into a dance routine which the crowd roared their appreciation at. It is the little nuances of their gig which made it memorable, and the conclusion of ‘Everest’ left this writer wanting to see them again on their tour in the Autumn.

Special mention goes to Sunflower Bean, who admitted that they had played two other festivals that weekend before getting to Latitude, and to Childhood, who rose above the technical difficulties of their soundcheck to deliver a set steeped in the northern soul stylising of their new record, Universal High.

It was left to Fleet Foxes to close the festival, and whilst they might be critically acclaimed (and rightly so-their debut is one of my favourite records), opening their headlining set with a series of tracks from their month old latest Crack-Up is probably not the way to entrance a crowd eager to hear tracks like ‘Mykanos’ or ‘White Winter Hymnal’. The latter came an hour into the set, but by this time, it was time for this writer to begin the 3 hour journey home.  Musically, the band were spot on, but their performance, or what I watched, left me feeling slightly cold. Still, hearing ‘White Winter Hymnal’ travel across the campsite towards the car park is as good as a song as any to make your leave of the festival.

As the gates closed on the 12th edition of Latitude, thoughts now turn to the weekend of the 18th July 2018, and this writer will be ready to do it all over again. It must be something about the place…