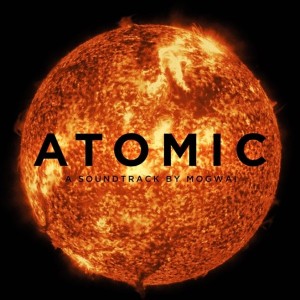 Mogwai never seem to stop working. If it isn’t releasing something fascinating from its ever expanding indie rock catalogue, then it’s doing a soundtrack, moulding its sound around a film or such. Do you remember how this band made the soundtrack to the epic film ‘Zidane,’ which spent the course of an entire match tracking that footballing legend’s every move (up to his red card)? Mogwai is a band that rarely misses its mark, and its soundtrack work is no different.

Atomic is a documentary film about atomic power, and the 2015 film is finally now seeing its soundtrack released. Whether you have seen the film or not doesn’t necessarily affect your enjoyment of this piece of music. Mogwai as ever sculpt compelling soundscapes that enhance many a visual feast. However, they have also managed the feat of it not being necessary to have the audio accompanying that which it was written for. It isn’t hard to imagine it being linked to the fearsome topic of atomic power though.

From the start there is a sense of intoxicating gloom, with small shards of light, hope, reaching in to the claustrophobia of the tracks (or is it reaching out?), but it’s a companion to a film that spells doom just as the dark reality of such power in the wrong hands. Something about the overall feel of the record has an 80s computer era vibe. It’s dark and heavy, (though the black clouds appear to part towards the album’s back end) but hard not to become somewhat mesmerised by. Therein lies one of the chief achievements of this band. Whatever it turns its hand to, it always somehow seems to pull it off. To emerge feeling hopeful, lighter and rather euphoric is a testament to how Mogwai can even find a way out of the atomic haze.

It’s yet another compelling record the band has made, and film or no film, it has to at least be given the time it undeniably deserves. Hard not to sit back in wonder, without the visual documentary it was made for you can picture a film all of your own from just the music. A majesty of sorts.